Funeral services for Leo Hjalmer Mattson, 91, of Mansfield will be at 1:30 p.m. Monday at Mansfield Lutheran Church. The Revs. Kent Otterman and Don Rose will officiate. Interment will be at Mansfield Cemetery. Visitation will be from 4 to 6 p.m. Sunday at Bayview/Freeborn Funeral Home and one hour prior to the service at the church on Monday. Online condolences are welcome at www.bayviewfuneral.com. 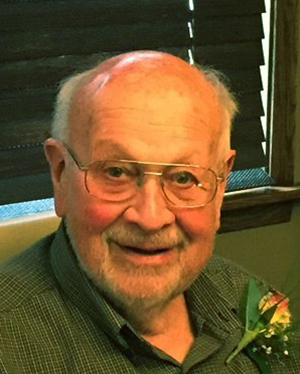 Leo Hjalmer Mattson was born May 29, 1926, in Mansfield Township, the son of Karl Hjalmer and Ella Louise (Gerhardt) Mattson. He attended School District 74, the Opdahl School, through the eighth grade. In 1944, he graduated from Alden High School. Leo had been on the District 74 School Board when it consolidated with Alden.

Leo lived his entire life on the homeplace in Mansfield Township that his dad purchased in 1930. Leo was a lifetime member of Mansfield Lutheran Church, where he was baptized, confirmed and married Phyllis Katzung on June 17, 1947. Leo and Phyllis met at Mansfield Church Luther League. Later in life, they enjoyed being chaperones for the youth Luther League. Leo served on the church board, has been a brotherhood member and a Sunday school superintendent.

Leo’s father was born in Sweden and came to America in 1912, at age 17. In 1967, Leo and his father visited family and toured parts of his father’s homeland. A few years later, Leo and Phyllis enjoyed visiting family in Sweden.

Leo worked with hogs his entire life. In 1961, he was selected for the Minnesota State Swine Honor Roll. The home place became the Triple M Gilts. Leo farmed with his father until 1960. He then opened a feed store in Kiester and began selling Purina Feed. Later, a new Purina mill and grain storage was built, which was known as Kiester Feed Service. The business was sold in the early 1980s. He then went in the liquid fertilizer business with his son, Kjell.

Leo continued being an active partner the rest of his working days, and always enjoyed visiting with his customers. For a number of years, Leo served on the Mansfield Town Board and served as an election judge. He had been active in 4-H for many years with this children as a parent and 4-H leader. Leo loved gardening and tended it religiously, raspberries being his favorite. Canning and freezing were summer rituals. Winemaking was another passion, using fruits from his garden. Family and friends reaped the benefits of his labor, enjoying his vegetables and fruits. After deer hunting, Leo looked forward to working with Kjell and created their own venison sausage recipe. More enjoyment came from spending time at Crane Lake, his “home away from home.” Whether he was fishing, hunting, watching the wildlife or reminiscing with family and friends, it seemed nothing else mattered.

Leo was preceded in death by his parents; sister, Carmen (Karl) Brune; and nephew, Loren Brune.