Mary I. Timm, 93, of Albert Lea, formerly of Huron, South Dakota, passed away Friday, Oct. 6, 2017,  at St. John’s Lutheran Community in Albert Lea. Her graveside service will begin at 3 p.m. Saturday at Riverside Cemetery in Huron. Visitation will be from 1 to 3 p.m. Saturday at Welter Funeral Home in Huron.

Mary I. Jewett, the daughter of Artie and Maggie (Jones) Jewett, was born Aug. 29, 1924, in Locust Grove, Oklahoma, where she attended school. 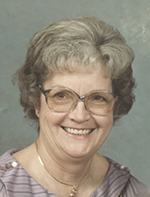 Mary met her husband of 49 years, William Timm, while working at a defense plant in San Diego during World War II. The couple were married 10 days later on Nov. 29, 1942, in Yuma, Arizona.

Mary and William were proud to have raised four children. After retiring in 1987, they began to spend their winters in Florida, Texas and Arizona.

Mary was preceded in death by her parents; husband, William, in 1992; son, Darrell Timm; and four brothers, Claude, Doyle, Jess and Junior Jewett.