Robert “Bob” Fredrick was born July 16, 1959, in England to Myrle W. and Mary Lou (Godfredson) Kelley. The son of a military father, his family lived in various places throughout the world during his youth. They settled in Leslie, Michigan, for a time and it was there Bob graduated from high school. His family later moved to the Austin/Albert Lea area. Bob returned to school and earned his machinist associate degree from Austin Area Vocational Technical School — now Riverland Community College. 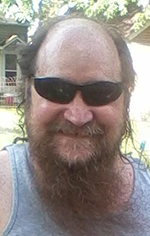 He was united in marriage to Dorothy Johnson in September 1978, and they had two sons, Alan and Robert. They later divorced.

On Jan. 24, 2014, he married Donna L. Freiermuth. He enjoyed working with pewter, collecting knives and swords and expressing his creativity while working on his computer. To his family and friends, Bob was known as a man with a very generous heart who treasured time spent with his grandchildren.

Bob was preceded in death by his parents; sister, Debra, in infancy; and great-nephews Jayce and Zane Hable.

A celebration of Bob’s life will be from 3 to 6 p.m. Thursday at Worlein Funeral Home in Austin.  In lieu of flowers, memorials are preferred to the Multiple Sclerosis Foundation.

Condolences may be expressed to the family online at www.worlein.com