The Tigers fall to 0-6 after homecoming loss 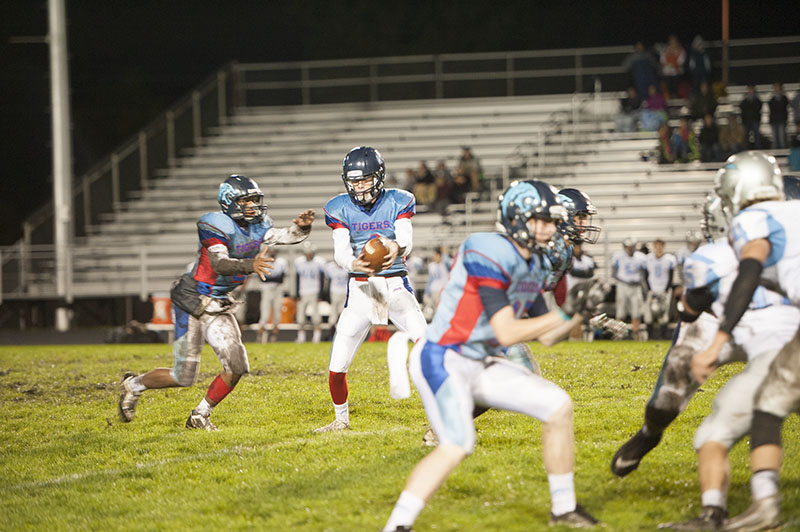 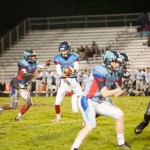 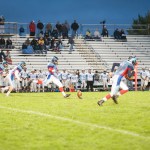 The Tigers kick the ball off to start the game Friday against the Titans. The Tigers would fall 40-8 in the game. – Tyler Julson/Albert Lea Tribune 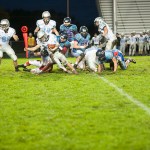 A Titan ball carrier is tackled for a minimum gain late in the second quarter Friday night. The Tigers would go on to lose the game, 40-8. – Tyler Julson/Albert Lea Tribune 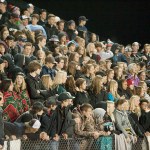 The Albert Lea student section looks on as the Tigers take on the Titans of TCU on Homecoming night. Despite the loss, the students still cheered loud and had a good time at the game Friday night. – Tyler Julson/Albert Lea Tribune 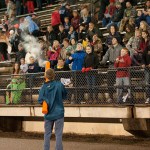 The robotics team supplied t-shirt cannons to be fired into the crowd during the Albert Lea homecoming game. -Tyler Julson/Albert Lea Tribune 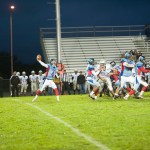 Albert Lea senior Alex Goodmanson throws a pass in the first quarter against TCU on Friday night. Goodmanson would throw the only touchdown for the Tigers on a deep pass to Garret Paczkowski. – Tyler Julson/Albert Lea Tribune 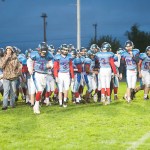 The Albert Lea Tigers prepare for battle Friday night just before the start of the Homecoming game against the TCU Titans. Albert Lea lost the game, 40-8. – Tyler Julson/Albert Lea Tribune 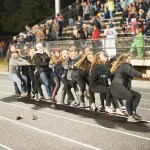 A game of tug-of-war was played at halftime between many students in attendence. There were also rounds for kids and the Homecoming court. – Tyler Julson/Albert Lea Tribune 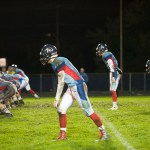 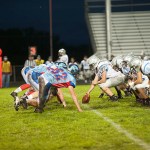 Albert Lea falls to 0-6 on the season and will play their final home game Friday against Worthington, a team head coach Corey Black is excited to see. – Tyler Julson/Albert Lea Tribune

The Albert Lea football team was unable to notch the Homecoming victory over Tri-City United Friday night. Despite only trailing by five points late in the second quarter, the Tigers were overcome by the passing offense of the Titans as they fell, 40-8.

The Titans got the scoring started right away in the game after they returned the opening kickoff to the endzone and took a 7-0 lead.

After a turnover deep in their own territory, the Tigers gave up their second score of the game. This time it was a short pass that would lead to a score and the Titans jumping out to a 13-0 lead after a missed extra point.

Albert Lea gained a bit of momentum when senior quarterback Alex Goodmanson threw a touchdown pass to Garret Paczkowski to cut into the Titan lead. After a two-point conversion attempt ran in by sophomore running back J.J. Owens, the Tigers only trailed 13-8.

Owens has been finding himself thrust into the offensive gameplan more and more over the past weeks and is sure to see more time as he provides a different style of running that other defenses aren’t used to, according to head coach Corey Black.

A stalled drive by the Tigers would end in a punt attempt from their own endzone. The Titans were barely able to get a couple fingers on the punt, but nonetheless were able to cover the ball deep in Tiger territory. The Titans capitalized on the good field position and added another eight points to their total after a short pass and two-point conversion.

TCU scored once more before halftime on yet another pass to make the score 28-8 at the break.

Albert Lea’s defense faired a little better in the second half as they only allowed two more touchdowns in the game. The offense, however, was unable to gather the momentum needed to find the endzone for the remainder of play.

Despite the loss, Black was focusing on the positives he saw in the team Friday.

“When we moved the ball on offense it was because we were truly executing,” he said. “It showed that when we take control of the things that we can and execute then we’re very effective. We just have to keep putting ourselves in position to where we know we can execute.”

The Tigers fall to 0-6 on the season and will play in their home finale on Friday when they take on the Trojans of Worthington.