Funeral services for Beverly J. Moen will be at 11 a.m. Thursday at Bonnerup Funeral chapel in Albert Lea. The Rev. Shane Koepke will officiate. Visitation will take place one hour prior to the service. Burial will be in Central Freeborn Cemetery in rural Albert Lea. 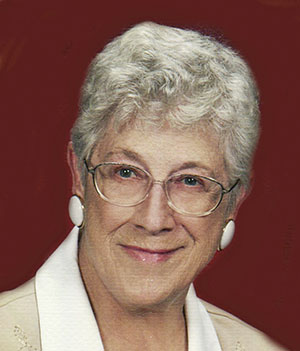 Beverly JoAnn (Wangen) Moen was born on July 9, 1932, in Riceland Township, to Charles and Irma (Johnson) Wangen. She graduated from Albert Lea High School. On May 25, 1956, she was united in marriage to Cleon Moen at East Freeborn Lutheran Church in rural Albert Lea.To this union, two children were born.

When Beverly was younger, she liked to go ballroom dancing with a group of her friends. She enjoyed going to movies at the movie theater, and she especially enjoyed spending time around the lake, or at the pond at her home where she lived for a number of years. Above all, Beverly enjoyed time spent with her children, grandchildren and great-grandchildren. Beverly was a child at heart and loved playing with her children and grandchildren. She could be described as a fun-loving grandma with a good sense of humor and liked to have fun. She was a devoted mother and grandmother, and always cherished the times she spent with her family.

She is preceded in death by her husband, Cleon; parents Charles and Irma; sister, Marjorie (Gar) Nash; and brothers-in-law Ronald Moen and Elwood Jensen.

Beverly is survived by her two children, Marti (Jim) Lillesve of Plymouth and Michael (Julie) Moen of New Richland; grandchildren Tami (Matt) Bryan of Prior Lake, Anthony (Christina Wilson) Lillesve of Roseville, Joshua (Jackie) Moen of New Richland, Alex (Andrea) Moen of Ellendale and Adam (Mathias Anderson) Moen of Minneapolis; great-grandchildren Kendra, Ashton, Will, Amelia, Breckyn and Bexleigh, and there is another great-grandchild on the way; sister-in-law, Mildred Jensen; as well as many other loving relatives and friends.

Her witty and spunky personality will always be remembered and she will be missed.