Ervin Sanford Trytten, 92, of Kiester died Friday, Sept. 15, 2017, at Parkview Care Center in Wells. Memorial services will be at 11 a.m. Saturday at Our Savior’s Lutheran Church in Kiester. The Rev. Katie Pals will officiate. Visitation will be one hour prior to the service at the church. Burial will be in Our Savior’s Lutheran Cemetery in Kiester with military honors accorded by Kiester American Legion Post No. 454. Bruss-Heitner Funeral Home in Wells is assisting the family. To leave an online condolence, visit www.brussheitner.com. 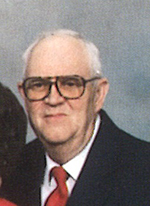 Ervin Sanford was born Dec. 1, 1924, in Kiester, the son of Edwin and Selma (Peterson) Trytten. Ervin attended the pit school through eighth grade, and then graduated from Kiester High School in 1942. He attended Zion Lutheran- Immanuel Lutheran — now Our Savior’s Lutheran Church in Kiester. After graduation, he honorably served his country in the United States Army from 1943 to 1945, and was involved in the Battle of The Bulge and liberating Dachau in Germany.

Ervin was united in marriage to Delores Jolane Charlson in 1947. To this union four children were born: Kevin, Bradley, Douglas and Wesley. Kevin died in 1952 at 2 years old of polio and Bradley died in 1952 at 3 days old. The couple later divorced.

Ervin married Doris (Dusbabek) Weber in 1968 in Albert Lea. Ervin worked at Standard Oil as an agent from 1947 to 1965. He was an assistant manager at Skyline Supper Club in Albert Lea and managed the Kiester Legion from 1969 to 1974. He owned and operated Erv’s Bar in Chisholm. He worked at Wilson & Co. and was a truck driver for Ecklund Trucking. He also worked at Jim Lee Funeral Home, and his last job was as a preschool bus driver for United South Central Elementary School. Ervin was active in Kiester American Legion Post No. 454 for more than 70 years, and was a bugler for over 50 years. Ervin’s interests were many, but his favorites were hunting and scouting deer with Maynard Soma. In his younger years he enjoyed bowling and softball. His beloved pets included his Cocker spaniel, Mack; golden lab, Missy; black lab, Joe; and his cats Becky and Toby.

Ervin is preceded in death by his parents; wife, Doris; and his siblings Gilman Trytten, Elvina “Bonnie” Linder, Amy Underwood and Art Trytten.