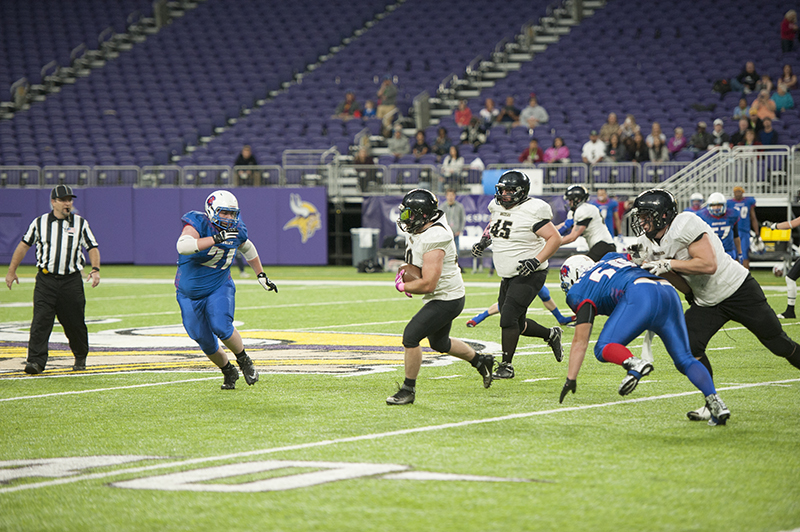 Albert Lea running back Charles Thorson breaks into the second round of defenders during the second quarter of Saturday morning's loss to Tri-State. The Grizzlies fell to the Buffalos, 42-0. - Tyler Julson/Albert Lea Tribune

MINNEAPOLIS – The Albert Lea Grizzlies traveld to Minneapolis on Saturday to take part in the annual Winter Pigskin Classic.

The Grizzlies and Buffalos got the big day started as the first of five games that would be played in U.S. Bank Stadium on Saturday.

Despite trailing by just 12 points at halftime, the Grizzles let up 30 second-half points to lose to the Buffalos, 42-0. 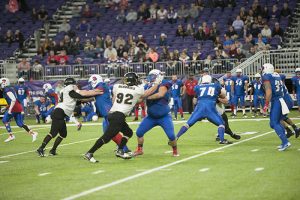 Albert Lea defensive end Allen Hendricks puts a move on to get past a Tri-State lineman. The Grizzlies lost their game at the Winter Pigskin Classic in U.S. Bank Stadium. -Tyler Julson/Albert Lea Tribune

A mishap on a field goal attempt  during Albert Lea’s first offensive possession put Tri-State in favorable field position and they would score just a few plays later.

Albert Lea wouldn’t be able to find any momentum through the rest of the game.

Running back Charles Thorson was one of the bright spots for the Grizzlies. He had multiple bruising carries and will undoubtedly be a strong piece for the Grizzlies in their upcoming season.

The Grizzlies finished their spring 2017 regular season with a record of 0-8 and will be looking for redemption when their 2018 season starts in late April. Their schedule is set to be released in January.