Jeff was born Feb. 22, 1978, in Albert Lea, the son of Dennis and Mary Long. He was raised in Albert Lea, attending Lakeview Elementary school prior to graduating from Albert Lea High School. He would further his education at Mankato State University.  Jeff worked for the Minnesota Department of Corrections in Stillwater as a correctional officer for the past several years. 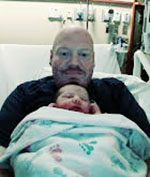 On June 13, 2014, he was united in marriage to his best friend, Andrea “Annie” Long, at The Orchard in Baldwin. This union would be more than blessed with the miracle birth of their beloved daughter, Aubree. Aubree was a little angel who gave them the greatest happiness in life.

Although Jeff was a private man, he cherished family and friends more than anything. He loved going for a quiet motorcycle ride or making his favorite beer, as he enjoyed being a member of the Beer Brewers Association. He also thoroughly enjoyed deer hunting and playing with his boxer dog, Titan.

He was preceded in death by his baby girl, Aubree; grandparents George and Ruth Long as well as another grandfather, Russel Nelson; brother-in-law, Troy Brown; and his uncles Howard “Howie” Germansen and Leo Long.

Funeral services for Jeff were at 2 p.m. Saturday at Hope Church in Oakdale. Burial will be in the forest lawn cemetery in Maplewood. His family will serve as casket bearers. Memorials are preferred to the discretion of his family. Funeral services have been entrusted to the O’Connell Family Funeral Home of Baldwin.