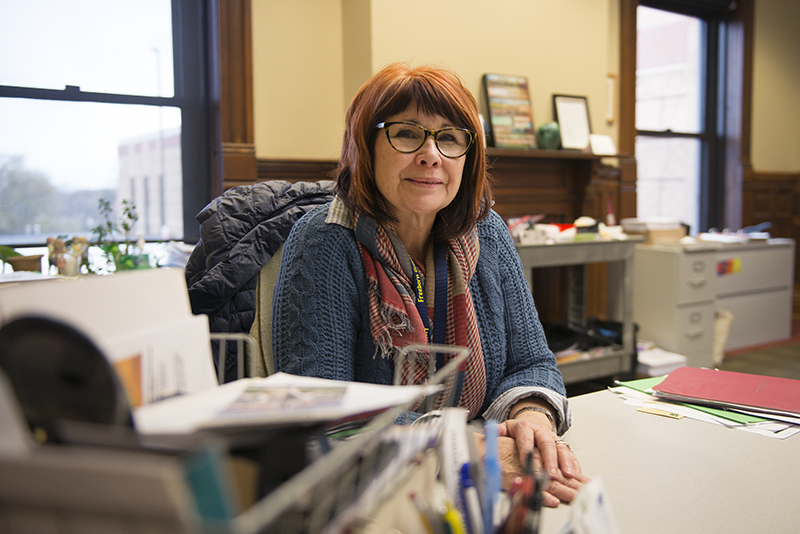 After nearly two decades of working for Freeborn County, a long-time advocate for the Crime Victims Crisis Center has decided to retire.

Initially a truancy officer with the county for about 5 1/2 years, Dotti Honsey has been the volunteer coordinator for the CVCC for all the rest of her 17 3/4 years with the county.

While Honsey originally planned to work with the severely mentally ill during her college years, one of her social work advisers suggested she explore another area through an apprenticeship. Honsey then called the CVCC in Albert Lea, and the rest is history.

“It became my passion,” she said.

Honsey grew up in a household with domestic violence, and watched her mother go through that trauma with no agency available to help her, and no public dialogue going on about the seriousness of a domestic violence situation.

Now, domestic violence is a crime that can be punishable by law with jail time, orders for protection, probation and fines, and there are more agencies looking to help domestic violence survivors get out of a toxic and dangerous situation.

Honsey wanted to be a part of the solution, and be able to be a person who could be there for someone who might have no one else when going through a situation such as domestic violence or other trauma in and out of the home.

Though she loves her job, Honsey decided it was time to retire, with a bit of a push from her family. Her husband and their three children reminded her of the traveling she has always wanted to do, and the other interests she hasn’t had time for, as they’ve watched Honsey give just about everything to her job over the past two decades. In addition, she could spend more time with her family, especially her nine grandchildren.

She plans to take at least a six-month break from anything involving the CVCC so that people can get used to whomever fills her position, but Honsey said she hopes to volunteer and possibly remain on the advisory board for the organization in her retirement. She’s also interested in getting involved with the Human Rights Commission, and would like to go on another mission trip, as well. Honsey previously went to Colombia to educate others at schools and orphanages about domestic violence.

Honsey hopes the CVCC continues to progress, and said she would like to see improved relationships between the different agencies that help those affected by domestic violence. She believes better communication and more education can only benefit all those involved, especially when helping victims.

“Sometimes, it’s way too easy for those victims to fall through the cracks,” she said.

Honsey said many don’t realize what an impact domestic violence can have, not just on two or more people directly involved in a situation, but in the surrounding community, as well — through money, time and resources used at the expense of the legal system, businesses and employers, children affected, those needing treatment, incarceration and through other channels of impact.

Honsey hopes the “Paint the Town Purple” initiative — started this year in place of the annual candlelight vigil — continues to expand, and said she hopes more events like Night to Ignite provide a positive, fun platform that still educates others about domestic violence.

While she looks forward to her next chapter, Honsey’s impending retirement will start out as bittersweet.

“I still have mixed emotions about retiring, because I love what I do,” she said.

There will be a retirement open house for Honsey from 2 to 4 p.m. Monday in the Freeborn Room of the Freeborn County Government Center, which the public is welcome to attend. Honsey’s last day will be Tuesday, when she also plans to speak with Freeborn County Commissioners during their regularly scheduled meeting.

“I’ve got some great coworkers, and I’ve been blessed to have met so many other people,” Honsey said. “Everybody has a purpose in life, and God pushes you toward that purpose. I think God pushed me toward this one.”