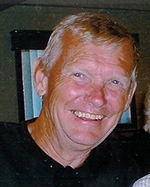 Neil moved to Mason City as a baby, where he had a charmed childhood that included winning the city’s first-ever soap box derby, appearing on a local TV show telling jokes, performing as an accomplished magician and always enjoying life with his buddies. Neil graduated from Mason City High School in 1956 and went on to graduate from Mason City Junior College — where he played on the football team — and then attended Iowa State University.

Neil was a natural born salesman and as his career evolved, corporate moves took him to cities in Iowa, Minnesota, Wisconsin, Missouri, Ohio, Texas and Tennessee; finally retiring from National Starch and Chemical to South Bend in 1997, where he was centrally located to his grandchildren.

Spending winters in Sun City, Arizona, Neil was able to golf year round. Golf was a passion of Neil’s that included him working as a starter at Erskine Golf Course for the past 10 years, up until this past August, and also included an annual golf trip for the last 35 years with a group of friends in an event they named the “Screen Door.” Neil also was fortunate to have shot eight holes-in-one throughout the years.

Neil never met a stranger. He always had a joke to tell. Those who knew Neil, know that he was one of the most genuine, kind, funny, friendly, all-around great guys you could ever meet. He was a lifelong Minnesota Vikings fan, but also a fan of all sports; and if Neil wasn’t at the golf course, you could likely find him either reading a book or watching whatever sport was on TV at the time.  If you were lucky, you got to enjoy an evening with Neil playing his guitar, singing songs and sharing a laugh. He was great at entertaining and enjoyed spending time with his family and friends, including lifelong friends from all of the many places his career took him. He was a wonderful father and the best husband ever. His family said, “Even with all his successes, he would tell you his greatest joy was taking care of our mom after she had her first stroke, and take care of her he did.”

The family would like to thank Nicole Hillman for the extraordinary care she gave their dad while he was in Albert Lea. She truly was an angel on Earth and he loved when she came to check on him.

There will be no service at this time, with a private memorial to be held at a future date. To remember Neil, his family hopes you will say hi to a stranger, play a round of golf, tell a joke, be happy no matter what — all of these would make him smile, and who knows, maybe you might just get that hole-in-one.