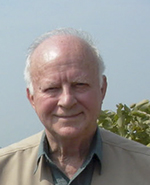 Dubbed “50s Einstein” by his high school classmates, Richie attended Grinnell College and graduated from the University of Minnesota with a degree in geological engineering. He moved to Grand Forks, North Dakota, to work for the North Dakota Geological Survey. There he met and married Dorothy Nordstrom and was promptly drafted into the U.S. Army. After serving for two years in Fort Polk, Louisiana, Richie joined Texaco Oil and the two moved to Houston,  where “Dick Maywald” began his long career as an exploration geophysicist.

Daughters Ruth and Julia were born. Family life took a sharp turn towards international adventure, with assignments in Calgary, Saudi Arabia, Indonesia, Norway, Nigeria and Trinidad, and brief stints in Portugal and London. Shortly after daughter Ruth was tragically killed in a car accident, Dick and Dorothy returned to Minnesota in 1993.

There he became known as Richard and immersed himself in genealogy, politics, the YMCA and Servas International, an organization dedicated to intercultural peace and understanding. Summers were spent at Turtle Lake. His calling card read “have suitcase, will travel” and through many trips, he pursued his deep interest in the world’s great religions and cultures.

After Dorothy died in 2003, Richard moved to Bellevue, Washington, to be close to his daughter, Julia, and her family. He joined the local YMCA and Unitarian Church with his friend, Katherine, took classes through OSHER Lifelong Learning Institute at University of Washington, participated in Great Decisions, dabbled in art, traveled with his friend Donna, and settled into his favorite role as grandpa.

In 2011, he was diagnosed with vascular Parkinson’s disease and in 2017 with advanced prostate cancer. Although these afflictions robbed him of his physical abilities, they did not dampen his spirit and desire to live life fully.

Over his lifetime, Richard mastered Arabic and Indonesian; learned to motorcycle, scuba dive, camp among the Bedouins and nesting sea turtles and play competitive badminton; and amassed an eclectic collection of arrowheads, Chinese ceramics, Persian carpets, paintings and Benin bronzes. He loved to meet new people, flirt with the ladies and engage in lively discourse about politics and economics. He said yes far more often than he said no. He had a big and generous heart. He will be deeply missed.

Preceding him in death are wife, Dorothy; and daughter, Ruth.

Surviving him are his sister, Laurel Armstrong; daughter, Julia Maywald, and her husband, Tom Donlea; and grandchildren Leo and Siri.