She was born to the Rev. Garold Bartley Noland and his wife, Lura Summerson Noland, on Jan. 19, 1930, in a farmhouse in Lincoln Township, Dallas County, Iowa. She was married to Alphonsus P. “Frank” O’Brien on Feb. 5, 1949, in Des Moines, Iowa. In 1963, the family moved to Albert Lea to raise their 12 children. After surviving Stage 4 breast cancer in the late 1970s, Ruth returned to school to get her nursing license and began her career as a nurse at Naeve Hospital. She worked there until her retirement in 1995. 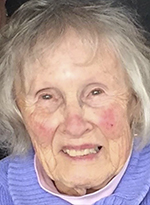 In her retirement, she spent countless hours volunteering in the hospital gift shop, Minnesota Citizens Concerned for Life, Pine Ridge Reservation mission trips, taking communion to the nursing homes, singing in the choir and being the best mother, grandmother and great-grandmother. In recent years, she survived multiple myeloma and a previous femur fracture.

She was preceded in death by her husband, Frank; her parents; brother, Gary; sons Brian and Kevin O’Brien; daughter, Kristy O’Brien-Wetzel; and sons-in-law Charles Faith and Peter Grundhoefer.

Visitation will be 5 to 7 p.m. today at Bonnerup Funeral Home. A funeral mass will take place at 10 a.m. Saturday with a one-hour visitation prior to the service. Lunch will follow at Marian Hall. Interment will be after the lunch at St. Theodore Catholic Cemetery.

Memorials are preferred to the family or to the donor’s choice.