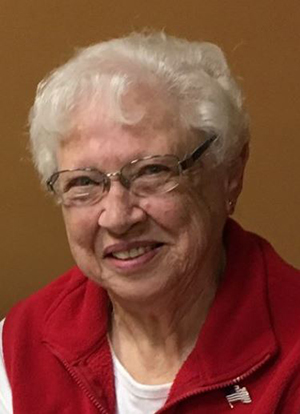 Annette and Conrad were very involved in the American Legion and auxiliary. They were commander and president of the Wells American Legion Post at the same time. Annette worked for Conrad in his accounting business before working for People’s Natural Gas in Wells, retiring in 1989. In 1994, after visiting her son, Steven, several times, she moved to Jackson, Wyoming. She worked for the U.S. Forest Service from 1998 to 2002. She then studied to become a certified nursing assistant, becoming the oldest CNA in Wyoming. She went back to work for the Forest Service in 2004, finally retiring in 2008. She was involved in the Our Lady of the Mountains Catholic Church in Jackson. She also worked as a volunteer for the local blood drive, spent many years working as an election official and served on the board at Pioneer Homestead.

She enjoyed her family and friends, crafts, and her annual trip to Yellowstone National Park on Mother’s Day. The family is planning memorial services in Jackson and Wells, which will take place this spring.

She was preceded in death by her husband, Conrad; grandson, Nathan; her mother and father; sisters Pauline, Margaret and Marian; brothers Herman, in infancy, and Carl; and beloved brother-in-laws.