Area Santas suit up to celebrate Christmas with Albert Lea 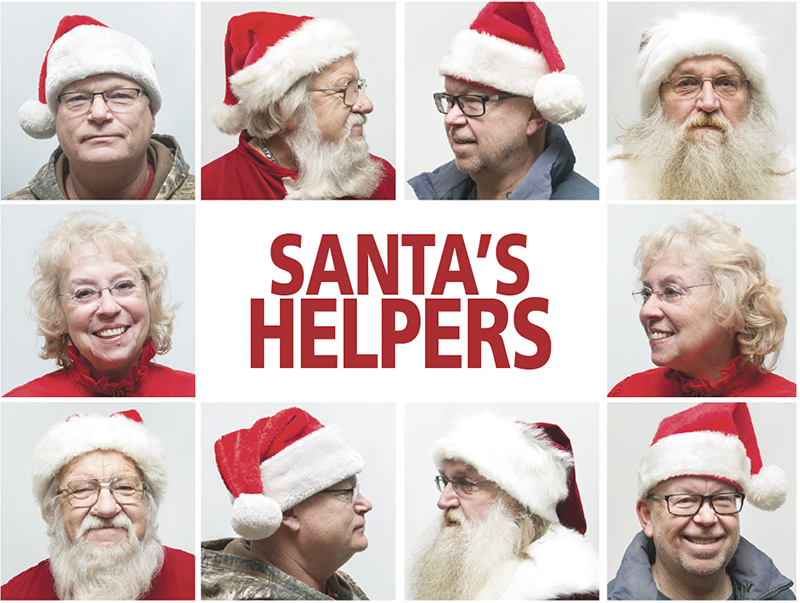 A number of area residents dress up to play Mr. and Mrs. Claus around the holidays — to help give the real Santa Claus a break to get back to the North Pole, of course. - Colleen Harrison/Albert Lea Tribune

Editor’s note: Don’t worry, kiddos — these Santas stand in for St. Nick so he can continue running his operation up at the North Pole. He’s busy this time of year! Even Santa Claus needs a little help from his friends. If you’d like to check on him, you can visit santatracker.google.com.

For 30 days after Christmas, Santa lives in the freezer at Russ Laite’s house.

At least, that’s where Laite’s Santa suit lives. When he took his Santa suit to the dry cleaners, the woman helping Laite told him he shouldn’t get it dry cleaned — it would ruin the thick white fur that edges his jacket and runs up the center of his torso.

Instead, on the dry cleaner’s direction, Laite lightly sprays the handmade suit with water and lays it in the freezer for a month to eliminate any odors.

Laite is hoping it won’t get any stains, because the suit didn’t come with a contingency plan.

This December, Albert Lea has at least seven Santas covering various community events that promise an appearance from the man in red. Laite is one.

He’s been playing Santa Claus for nine years, and estimates he will be booked for an appearance a dozen times in one Christmas season.

The suit came from the wife of a previous Santa, when her husband passed away from cancer and Laite was asked to take his place as Santa at his campground’s event. Since then, he thinks he has worn it about 64 more times after the initial appearance.

“After that, it kind of snowballed,” Laite said.

Now, he appears as Santa for several day cares, the American Legion and
a motel out by Love’s Travel Stop.

Larry Behrens’ suit lives somewhere different. When it’s not on, he keeps it tucked away in a dark-colored suit bag. When it’s zipped up, it looks like any other suit.

Behrens’ suit was an itinerary item on a trip to Alaska he took with his grandsons last year. Behrens, who has been playing Santa on and off since 1980, lived in the state previously and wanted to check in to the North Pole — North Pole, Alaska. He specifically planned a trip there to Santa’s Village so he could buy a suit. They didn’t have any, but he ran into a Santa Claus there who told him how to order one from a website run by a woman who makes the suits.

“You put the suit on, and you just think differently,” Behrens said.

Both Behrens and Laite have beards that brush the front of their Santa suits, well past their chins. For both, it’s a method they use to put skeptical children in their place.

He has had his for over two years. Laite also keeps his beard year-round, but keeps it trimmed to one inch until June, when he starts growing it out for the Christmas season.

“You’ve got to have the look,” Laite said.

“It was very empowering,” Christianson said. “Once you put that coat on … it gives you a different feeling.”

Christianson’s first Father Christmas appearance was last weekend at the UPDS father-daughter Razzle Dazzle dance. He was not there to be sat on. He was there to dance.

Although now he said it seems like a good fit due to his experience with children through youth ministry at First Presbyterian Church, he was nervous before the event because of his own expectations of Santa. What, exactly, does Santa dance like? He drove over in the suit and practiced his “ho, ho, ho” in his parked car before the event.

“Driving in costume is not easy because it’s big,” Christianson said. “And the hair and stuff — you can’t see. Your peripheral is not real good.”

Laite said he does get noticed when he’s driving to an event in costume.

When children notice Laite is driving up in a truck instead of a sleigh, he tells them his reindeer are still at the North Pole. 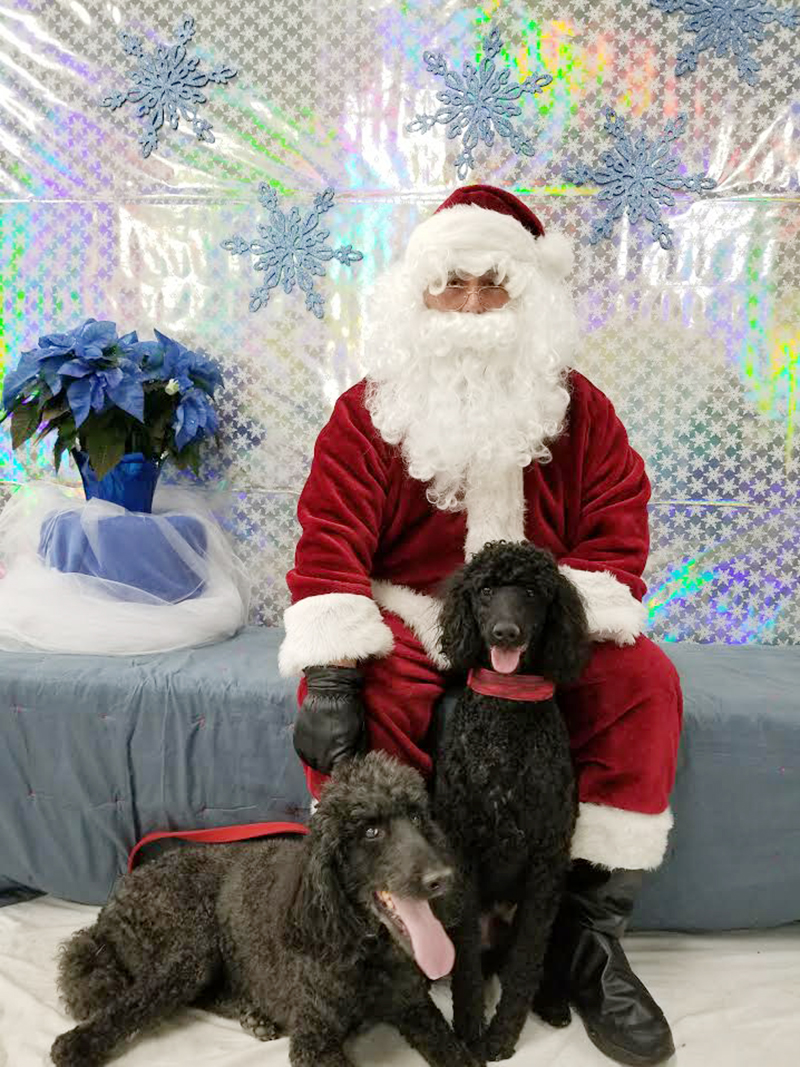 John Double initially started playing Santa Claus for people who wanted to get pictures of their pets with jolly old St. Nick. – Provided

For one Santa, the visitors are asking fewer questions about Santa’s sleigh. In fact, they can’t ask questions at all.

“I learned my first year that I am not the ‘home visit’ type of Santa,” John Double said in an email. “I preferred to stick to fundraising and community events as my way of passing things forward.”

Double worked with The Pet Authority this year, posing for pictures with people’s animals as part of a fundraiser for the Humane Society of Freeborn County. Double volunteered to do this after he wanted a Santa picture with his own dog and struggled to find a Santa who did that.

Double has also worked with children in situations when someone was in a pinch for a Santa stand-in. He’ll be helping out at the downtown bazaar and the Parks and Recreation candy cane hunt. When he worked the Intego Santa party this year, he asked the business to make a donation in lieu of payment.

Double said he does this to fill a need for Santas, especially those comfortable with animals, and to make sure people in the community have an opportunity to make lifelong memories.

“I still have, on my phone, a picture of Santa’s Hous’ from Winona, where I grew up,” Double said. “It’s an experience I remember and was something the kids looked forward to seeing when it arrived downtown. I wanted to help pay that forward to other families, as someone did that for me.”

“You know, we’d do anything for our kids,” Joyce Crow said.

In addition to red and white, their costumes feature green. Dave Crow wears a green velvet vest, a white shirt, khaki pants and a hat. Joyce Crow has a red skirt and ruffled blouse, topped with a green apron from the waist down.

“(Crow-Reinhart) imagined him as coming out of his workshop,” Joyce Crow said.

Their daughter took college classes for theater costuming and made her father a cloak they drape over a chair for atmosphere. Joyce Crow made the vest.

The pair have been the resident Clauses at the Freeborn County Historical Museum, Library and Village Christmas gathering for three years, Joyce Crow said. She takes a tablet with her and writes down names and ages.

Behrens doesn’t write things down, but he does try to hold them in his head for a while.

“I still try and remember what they ask for, because sometimes the parent will come up to me and ask me what they asked for because the only one they’ll tell is Santa Claus,” Behrens said.

“It’s interesting to kind of keep up on some of the toys because I just happened to look through some of the ads, and it was a good thing because then I kind of knew what they were talking about,” Joyce Crow said. “I could give Santa a heads up.”

The pair also uses their position to give the parents a little leeway with gift requests so the parents don’t feel they are locked into giving an expensive present promised by Santa.

He says something like, “We’ll see what we can do.”

“If it’s something like that, Dave will kind of put that in there so they don’t expect too much,” Joyce Crow said.

For Kurt Tuttle, the role was a little less voluntary in its inception.

“My first sergeant ordered me to,” he said.

His National Guard unit had just returned from Afghanistan in 2006, and Tuttle said there were a lot of children at the Guard Christmas party.

“They were just so happy that their dads were back,” he said.

Tuttle was less happy about being Santa.

“I didn’t want to do it to begin with, but since I started, everybody seemed to be having a good time,” Tuttle said.

He was in a fake beard and family pictures.

But for Tuttle, who is currently working on getting a license to drive a school bus, he does it to make children happy.

“I’d rather be around kids than really adults,” he said. “I think I relate better. My wife always said I’m a kid at heart.”

This is the same wife who is contemplating pairing up with Tuttle as the Mrs. Claus to his Mr. While the suit he is using this year belongs to Wedgewood Cove, he’s thinking about getting his own.

“Christmas is my time of year,” Tuttle said. “I like Christmas.”

One year when his daughters began to question Santa’s reality, Tuttle took a two by two board and dragged it through the snow to look like sleigh tracks. He used a deer hoof to make prints.

His daughter is the one who volunteered him to break the 11-year hiatus.

This is something Joyce Crow said her husband also embraces.

“Of course, about a week before we go, Dave’s ‘ho, ho ho’-ing around the house,” she said.

For some Santas, it wasn’t as easy in the beginning. There were big boots to fill.

“You get a little nervous because you meet all these people,” Laite said.

Joyce Crow said she is waiting on her toes for the day someone says to her, “Yeah, I told you that last year.”

Sometimes, the Santas are not the only ones who are nervous. When Behrens meets a child who is scared to sit on his lap, he has them stand next to him and chat.

“You just try to make them feel comfortable,” Laite said.

Laite remembers one little boy who was too nervous to sit with him. Later, Laite gave him a fist bump and a high five. He said the boy’s dad told him he had never let a Santa make it that close before.

“Something like that makes you feel good,” Laite said.

It’s these interactions with children that several Santas said kept them on Dasher, on donning a red suit at the holidays.

“Just to see them smile is worth it,” Laite said.

But for Christianson, there’s a little extra incentive in keeping Santa Claus close.

“I still believe,” Christianson said. “Otherwise, I wouldn’t get anything in my stocking on Christmas day.”