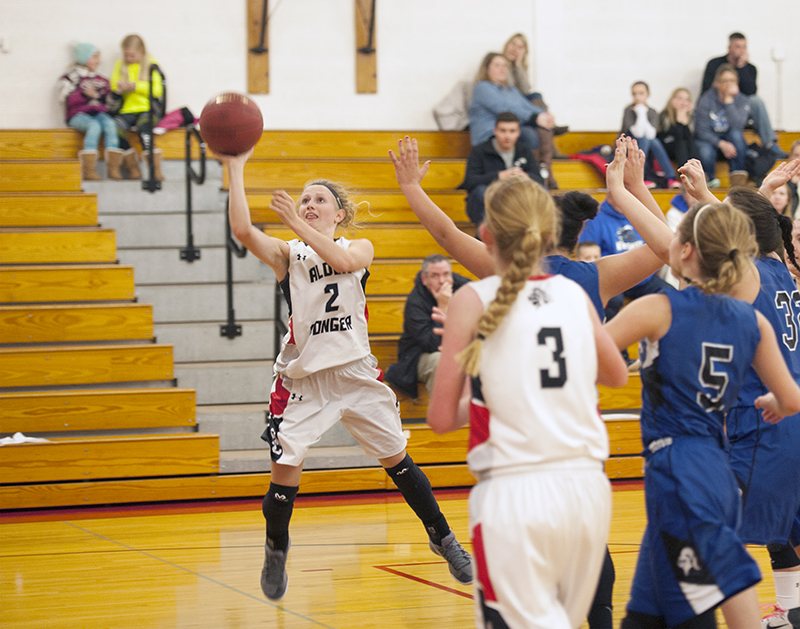 Alden-Conger junior Erika Bute drives in for a layup in the first half of Friday night’s game against Lake Crystal-Wellcome Memorial. Bute was a big factor in the comeback efforts by the Knights. - Tyler Julson/Albert Lea Tribune

Alden-Conger gets its first win of the season

NEW RICHLAND — The consolation game of the NRHEG Holiday Tournament pitted the Alden-Conger Knights against the Lake Crystal-Wellcome Memorial Knights.

Despite trailing for most of the game, Alden-Conger was able to pull out the victory with a late comeback, as it bested LCWM, 70-68.

Although LCWM kept the lead for the majority of the first half, Alden-Conger was never far behind. Alden-Conger would lead for one possession midway through the half, but would drop back down after a quick layup from LCWM.

The most Alden-Conger trailed in the first half was by 10 points with around two minutes remaining. The Knights would go on a short run before the half was over, however, to bring them back within striking distance at the halfway point. The Knights were led in the first half by freshman Abbie Theusch with 10 points. Junior Erika Bute wasn’t far behind with six, while senior Sydney Chicos had four. Juniors Megan Linn and Autumn Soost, along with freshman Kylie Korman, all contributed two points each. 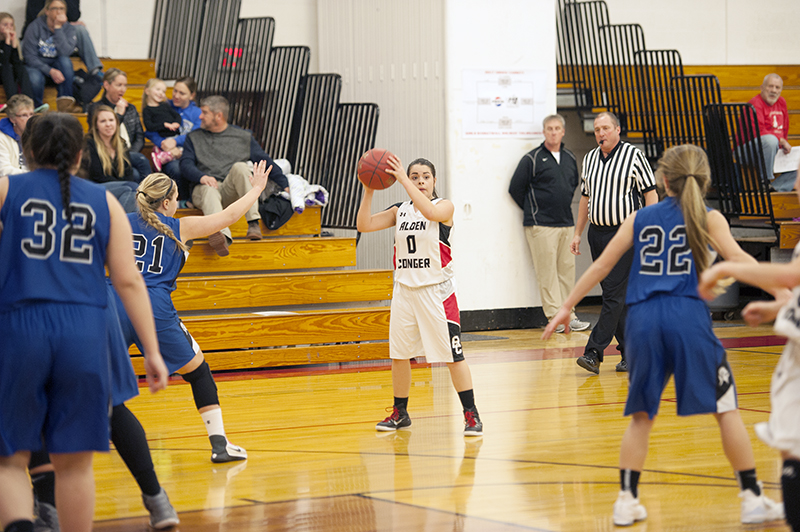 Alden-Conger was able to use their late first-half momentum to climb back into the game in the second half, even taking the lead with less than 10 minutes remaining. A big catalyst to the Knights surge was Bute. Whether a big three-point basket or an assist below the hoop, she always seemed to be a part of the action.

LCWM, however, would go on a 17-5 run to take a commanding nine-point lead with six minutes remaining.

The Knights would have one final shot to complete their comeback — and come back they did.

Bute came in clutch with four big free-throws to give the Knights a three-point lead with less than 30 seconds remaining. Also coming alive late in the game was sophomore Mikenna Erickson, who pulled in some key rebounds and scored 11 points in the second half.

Alden-Conger was able to hold off LCWM in the final seconds to walk away with the victory.

Alden-Conger was led by Bute with 25 points, and Theusch finished with 14 points. Chicos and Erickson each had 11.

The win gives Alden-Conger its first victory of the season as it moves to 1-7. The team will be back in action Tuesday when it travels to Janesville-Waldorf-Pemberton.