His parents were Martin James McGill and Manoah May Wheeler McGill. The family moved to Hollandale in 1926. Larry was baptized and confirmed at Community Lutheran Church in Geneva. He attended Westside Hollandale School through the eighth grade. He worked on the farm until 1935. Then he went to work as a farm hired hand until 1938. After that he worked for Davis Tree Expert Co. of Kent, Ohio. 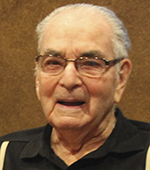 On May 18, 1940, he married Ethel Irene Peterson and worked with Ethel’s folks on their farm. Their son, Dennis, was born May 17, 1944. He went to work for Wilson & Co. for six years, Community Oil for nine years and the Minneapolis Star Tribune for 23 years, retiring in 1978. Although this period of his life was extremely busy, he took time to spend with his family camping and boating. This included the Austin Boat Club, where he and Ethel met many lifelong friends. After retiring he went to work driving a school bus for 17 years, retiring at the age of 75. When he retired from driving, the kids on his bus chipped together and bought him a retirement gift.

Then it was time for him and Ethel to travel — Hawaii, five countries in Europe and the Holy Land, to mention a few. They also spent several winters in Texas and Arizona. In addition to travel, Larry enjoyed gardening, fishing and making the best pumpkin pie, rhubarb strawberry jam and potato cakes.

Ethel went to be with the Lord on March 4, 2010, after a fight with brain cancer. He was also preceded in death by all of his siblings: Ester, Nell, Georgie, Albert, Wilbur, Lula, Earl, Opal, John and Basil.

On Sept. 22, 2012, Larry married Maurine Larson in the chapel at Thorne Crest Senior Living Community. After they were married, they traveled to the Florida Keys and Alaska.

He was active in the Kiwanis. He and his son, Denny, rang bells for the Salvation Army every year for over 20 years with other members of the Kiwanis. He was a member of the Elks and Moose clubs for several years, as well.

Getting the family together was very important to him. He organized the McGill family reunion for over 30 years through this year. He would reserve the space at Edgewater Park and send out the invitations by email.

Larry had no idea what a positive impact he had on so many people throughout his life. When he decided to go into palliative care, even the doctors who had only known him for a week got tears in their eyes.

Memorials are suggested to Grace Lutheran Church of Albert Lea.