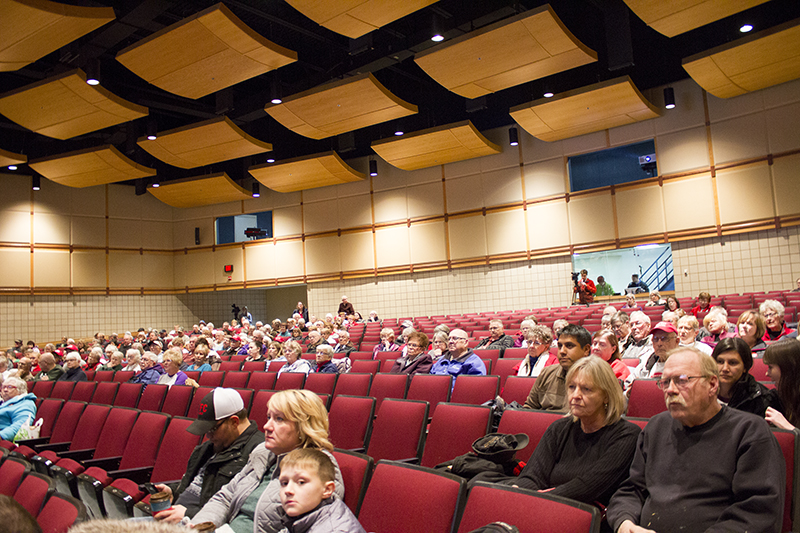 Approximately half of the Albert Lea High School auditorium was full Tuesday to hear the results of a feasibility study completed by Quorum Health Resources LLC. - Sam Wilmes/Albert Lea Tribune

An Albert Lea hospital can be profitable in the future, according to a recently-released report by Quorum Health Services LLC.

The results of the 60-page report compiled by the nationally-known health care organization were released to the public Tuesday at the Albert Lea High School auditorium and comes as Mayo Clinic Health System transitions most inpatient services to Austin.

In the report, Quorum estimated $60 million to $80 million in investment would be needed to either acquire the hospital from Mayo Clinic or to build a new hospital, as well as invest in a sustainable physician network.

The report found the new entity would need to capture a “significant market share” aligned with Mayo and operate efficiently to manage costs, as well as navigate challenging times for community hospitals.

“It is the opinion of Quorum Health Resources that a hospital in Albert Lea would require a capital partner that is willing to invest significant resources in order to make this happen,” the report states.

Quorum suggested the city of Albert Lea, Freeborn County and Save Our Hospital work with Mayo Clinic Health System to keep as many services as possible in Albert Lea, evaluate the development of a federally qualified health center that would help the facility hire physicians and continue to seek another health care provider that either agrees with Mayo Clinic to operate and control the Albert Lea hospital or build a new hospital and compete with Mayo Clinic.

The report came after the Albert Lea City Council, Freeborn County Board of Commissioners and Save Our Hospital organization each agreed to equally fund the maximum $75,000 contract.

“The facts are that we remain committed to our patients, our employees and the people of Albert Lea and Austin,” she said. “We are honored to be this community’s long-time health care provider, and we intend to be here for future generations.

“While it is not Mayo Clinic’s decision as to whether other providers come to Albert Lea, we are not interested in leaving Albert Lea, and therefore the medical center is not for sale.”

Maher discussed the composition of the study and said Quorum did not have access to Mayo’s recent financial information, limiting the ability of the report to know the financial situation of Mayo Clinic Health System in Albert Lea and Austin.

A city/county hospital likely isn’t feasible due to the plan’s high cost and risk, Maher said, who discussed the significant market share Mayo Clinic has in southeastern Minnesota and said the issues Mayo Clinic has cited as factors in its decision to transfer services to Austin — difficulty  attracting physicians and profit losses — are issues health care providers are facing nationwide.

Maher described the Albert Lea area as an “attractive market” for health care.

After the meeting, Jennifer Vogt-Erickson, Save Our Hospital vice chairwoman for public relations, said in a press release local representatives will use the study “to clear hurdles and pursue an alternative provider for 55,000 people in the Freeborn County area.”

Vogt-Erickson cited a finding in the study that stated another entity could operate the facility at a $4.4 million annual profit.

“This encouraging report signals to medical providers in the Midwest to come to Albert Lea, because not only is the county designated as a health professional shortage area, but also patients would be extremely welcoming of a better-performing organization,” she said.

In the press release, District 27 Sen. Dan Sparks, DFL-Austin, said because of his constituents who are served by the hospital and in light of the Quorum report, he supports efforts to bring a second provider to the community.

“I will work with my colleagues in the Minnesota Senate to ensure any legislative roadblocks are lifted,” he said. “I also believe competition is sorely needed in southeastern Minnesota’s health care market, and patients could receive high-quality health care at lower prices with another provider.”

After the meeting, Save Our Hospital co-chairperson Mariah Lynne and Freeborn County Administrator Tom Jensen each said they would evaluate the study.

Lynne described the report as “well-done” and well-researched,” and she plans to further evaluate the information.

Jensen said talks between local government entities and the hospital system will continue.

“It was an enormous amount of information to be presented in one night,” he said. “It was way too much to digest in one evening, so we’re going to forward the information to the commissioners. We are going to continue to work on it with the city.

“As the public knows, the city and the county have been in talks with Mayo over a variety of things, so I think there’s something that we can accomplish through this report and through continuing to talk with Mayo.”