Tigers get win in Rochester 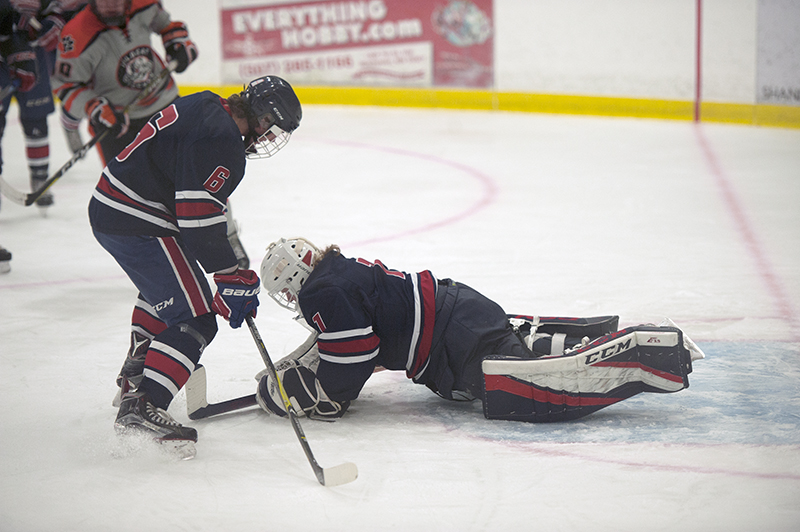 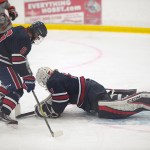 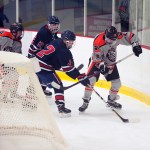 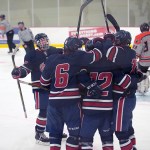 Albert Lea players surround senior Alex Ulve after he made his second goal of the game. The Tigers scored five goals in the second period to propel themselves to the win. – Tyler Julson/Albert Lea Tribune 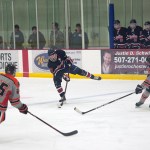 Albert Lea senior Alexander Goodmanson takes a shot in the second period against Verona. Goodmanson scored the first goal of the game for the Tigers. – Tyler Julson/Albert Lea Tribune

ROCHESTER — The Albert Lea boys’ hockey team got off to a hot start in the Kiwanis hockey tournament held in Rochester on Wednesday afternoon.

Despite leading by just one goal after the first period, the Tigers hit their stride in the second period, scoring five goals and going on to beat the Wildcats, 6-4.

The game started off closely contested with neither team getting many shots on goal in the first period. That was until senior Alexander Goodmanson scored the first goal for the Tigers in the 13th minute. He was assisted by senior Spencer Chicos.

Albert Lea would go to the locker room with a 1-0 lead after the first period.

The Tigers would take the momentum they grabbed in the first period and run with it to start the second. The Tigers scored a total of five goals in the second period. The first came from sophomore Hayden Johnston on an assist from sophomore Jacob Prihoda in in the second minute of play. Senior captain Alex Ulve would add a goal to the total just two minutes later off an assist from Chicos, his second of the day.

Senior captain Bergan Lundak would score in the eighth minute of the second period.  Ulve and senior captain Michael Savelkoul assisted on the goal. Up four goals to none, the Tigers would add to the lead with another goal from Ulve, his second of the game.

One more goal would be scored before the second period was over. This time it came during a power play with three minutes left to play from Savelkoul and assisted from Goodmanson.

The Wildcats were finally able to get a goal on the board late in the second period to bring their deficit to within five.

It seemed like the Tigers were going to win the game going away in the third period. However, the Wildcats weren’t going to go away quietly.

Verona would give Albert Lea a small scare, scoring three goals quickly in the third period. Suddenly, the margin was just two goals with over nine minutes to play.

The Wildcats would give it a shot, but the Tiger lead proved to be too much in the end.

Albert Lea moves to 5-2 on the season and will play again today at 5 p.m. when they take on the Fargo South/Shanley Bruins.