Maj. Bradley P. Coughlin, a native of Alden-Conger, was relieved from his command in the United States Army in a ceremony Aug. 31 at the 10th Special Forces Airborne Complex in Fort Carson, Colorado, according to a press release. 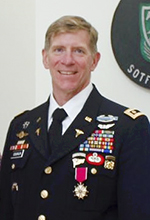 Coughlin served as an infantryman, special forces medical sergeant and physician assistant from Dec. 4, 1986, to Dec. 31. Coughlin’s contributions throughout his 31-year career culminated as the battalion physician assistant with 2nd Battalion, 10th Special Forces Group. According to a press release, Coughlin initially contemplated retiring in 2008 from the Army National Guard with 22 years of both active and reserve service, all but five of those years in the special operations community. Instead, he returned to active duty to support the global war on terror.

After returning to active duty, he deployed twice to Iraq and once to Afghanistan. He also supported operations in central and northwest Africa.

Coughlin began his career as a junior enlisted leader in the 75th Ranger Regiment, where he served as a ranger fire team leader and jumpmaster during the combat airborne assault into Rio Hato, Panama.

During his time with A Company, 3rd Battalion, 75th Ranger Regiment, he served as a as a jumpmaster, pathfinder and placed seventh in the 1990 Best Ranger Competition. He participated in training exercises in multiple locations, including Puerto Rico, Skuthorpe, England and Panama. He was also selected to be a small unit tactics trainer at the United States Military Academy at West Point.

Coughlin served with the 135 th Infantry, Minnesota Army National Guard from June 1991 to March 1992, prior to training as a Special Forces medical sergeant.

Throughout Couglin’s career, he has received several awards and decoration, including a Bronze Star, five Army Commendation Medals, Legion of Merit, National Defense Service Medal and Global War on Terrorism Service medal, among others.

Opportunities to learn to hunt turkeys this spring