Being a part of history 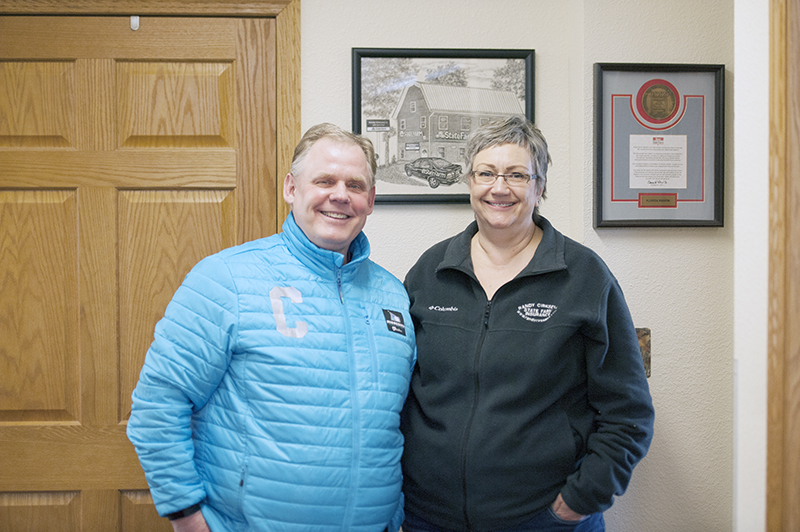 Randy Cirksena, stands with one of his employees, Kris Brandt, at his office in Albert Lea. Cirksena served on the volunteer selection committee for Super Bowl 52 and will be a team captain at the Mall of America. Tyler Julson/Albert Lea Tribune

For many people, being a part of all of the Super Bowl festivities in Minneapolis this week would be a dream. For Randy Cirksena, a State Farm agent in Albert Lea, that dream has become a reality.

Cirksena was chosen to be a part of the committee that selected all of the volunteers that will be working throughout the Minneapolis and St. Paul area this week. Dubbed “Crew 52,” the team of more than 10,000 volunteers will be spread all over the Twin Cities helping and directing event goers in any way they can.

“There were about 75 of us interviewing thousands of people,” Cirksena said. “We interviewed people in 20-minute intervals until we reached about 10,000 — really cool people that wanted to represent the bold North and Crew 52. That in itself was really fun. We rarely had to tell somebody no, because the majority of people that came to us were great.”

Cirksena got the opportunity to be a part of the selection committee because of his involvement in The Clash, a high school dual wrestling tournament in Rochester that draws top teams from all around the country. He was one of the people to get in on the ground floor when the tournament was starting. He said he has been one of the primary team recruiters for 10 years, making sure the top teams in the country were going to participate.

“I got an email out of the blue, as a result of my involvement in (The Clash), wondering if I would be interested in participating in some facet of the Super Bowl host committee,” he said. “Honestly, it’s been one of the funnest things I’ve done as an adult — the cross section of great people that just wanted to come and volunteer and be a part of hosting the many people that will be flooding into Minnesota.”

Being on the volunteer selection committee isn’t the only part of Cirksena’s involvement. He will also be serving as one of the team captains of Crew 52, primarily at the Mall of America. His duties include greeting the other volunteers and making sure they have everything they need.

As a lifelong Vikings fan, Cirksena was disappointed when they failed to make the Super Bowl, coming up just one game short. However, he said he was extremely excited when Stefon Diggs caught the pass to send them to the NFC Championship. Especially after the bountygate scandal, he said the win over the Saints was even more special.

“What goes around comes around,” said Cirksena.

That phrase rings true again after Minnesota’s loss to Philadelphia. Many stories have circulated about the negative treatment Vikings fans faced while in the City of Brotherly Love. However, Cirksena hopes the people of Minnesota don’t resort to the same tactics as some of the people in Philadelphia.

“I hope that when the people of Philadelphia get here, they find a completely opposite greeting than the one Minnesota fans got there,” Cirksena said. “I hope they find this a place of pleasantness and want to come back and vacation here. Sadly, I don’t think that is the impression people got of Philadelphia.”

Cirksena, who has been with State Farm for 16 years, also spends a lot of time within the community. He serves as a Chamber Ambassador, has been the president of the Ambassadors for a year and works with the Choose Civility Committee.

He said he has worked with a lot of great people in Albert Lea, including his fellow State Farm agents and the late Albert Lea-Freeborn County Chamber of Commerce Executive Director, Randy Kehr. However, the person that has inspired him the most and is his life hero is his sister, who was diagnosed with cerebral palsy. He said his sister has worked so hard to get where she is and has done amazing at her job, which she has kept for 40 years. He said she inspires him every day and she “has a heart of gold.”

Cirksena talked about what it means to him to be able to be a part of the second Super Bowl to be hosted in Minneapolis.

“I’m excited, I’m pumped,” he said. “Why not try and be a part of it?… For me, it’s just an evolution from the similar things I’ve done in the past. It’s about welcoming folks, being kind and caring and treating others the way I’d want to be treated.”

Interesting fact: Cirksena enjoys learning about his genealogy. He has traced his lineage back as early as the 900s and learned he is a descendant of Scottish royalty.