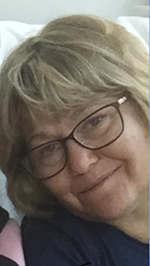 Caren Grace (Cornick) Oster was born Oct. 29, 1960, to Roger and Donna (Beckjorden) Cornick in Albert Lea. Caren made her public confession of faith through adult baptism at First Baptist Church of Albert Lea. While growing up, she danced and later taught classes for many years at Joyce Matthies Dance Centre in Albert Lea. Caren graduated from Albert Lea High School in 1979. She received her bachelor’s degree in dietetics from the University of Minnesota in 1986.

Caren began her career as a registered clinical dietitian interning at Barnes Hospital in St. Louis. She then moved to St. John’s Health East in Maplewood and continued working there until her death.

Caren enjoyed her work; being able to work with and educate her patients was important to her.

Caren found many enjoyments throughout her life. She enjoyed beekeeping, dancing, finding deals at thrift stores and was always on social media. She was a lover of cats and her dog, Dolly. Caren was strong until the very end; she was a fighter, intelligent, caring, opinionated, but above all — loving. Caren overcame many obstacles in her life, including being a 53-year survivor of Type 1 diabetes. Above all, Caren was proud of her family. Her husband and two children meant everything to her.

She is preceded in death by her mother, Donna Cornick; and brother, Dale Cornick.

Those left to carry on her legacy include her husband of 29 years, Kurt Oster; children Andrew Oster and Anna Oster; father, Roger Cornick; sister, Ann (Lonny) Hultgren, and their children Brett and Clay Hultgren; along with a large number of extended family and friends.

Funeral services for Caren will be at 2 p.m. Saturday at Bridge Community Church South, formerly First Baptist Church, 335 W. Clark St. in Albert Lea. Visitation will begin at noon and continue until the time of the service. Interment will take place at Hillcrest Cemetery.