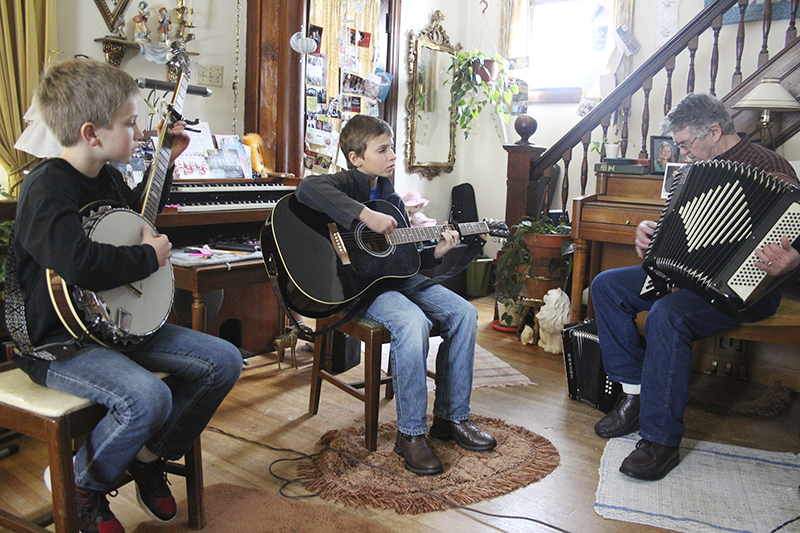 Thomas Jacobusse, 11, and Elias Jacobusse, 13, take their lessons together and learn to sing along to the bluegrass tunes they play as a duo. Sarah Kocher/Albert Lea Tribune

Together, the pair takes an hour-long lesson, bluegrass style. They sing along. Clarence Heavner teaches the guitar and the banjo, but he also said he constantly has a student learning the German button accordion. He will also teach mandolin, violin, harmonica and the piano accordion.

His wife, Barbara Heavner, also uses the front room for lessons: She teaches piano, the piano accordion (not to be confused with the German button accordion), the keyboard and the organ. She has been teaching music lessons for 65 years now.

“I started at home, with the younger brothers and sisters,” Barbara Heavner said. She took piano lessons herself, and enjoyed them. When she worked at Western Grocer Co. in accounts receivable, she would spend some of her lunch break at the music store, practicing.

“I play by note because they had no time for making up stuff and playing it by ear,” Barbara Heavner said.

He got his first harmonica at 10 years old from a Montgomery Ward catalog.

“I was just a kid and some of the neighbors had harmonicas, and the music just got to me,” Clarence Heavner said. “Oh, I had to play it for myself.”

He started with the harmonica, the guitar and the German button accordion. (Clarence Heavner said he grew up in a German community environment, and the neighbors had accordions, too.)

He didn’t learn to read music until 15 years ago when playing with a group of relatives.

“My notes didn’t always jibe with theirs, and then I’d get dirty looks,” Heavner said. Thomas Jacobusse picked up the banjo after starting on the guitar. He plays and sings through “The Ballad of Davy Crockett.”

Once he learned how to read music, he started teaching lessons.

“Even though I learned all this without music, you have to have an understanding of music to thoroughly teach,” Clarence Heavner said. When he teaches, he couples this knowledge with his ear training and some hand reading — this is the game of finger telephone the Jacobusse brothers were playing.

Clarence Heavner enjoys teaching his students to play the way he learned: together. He, Thomas Jacobusse and Elias Jacobusse sometimes go out to Northbridge Mall’s Bluegrass and Country Music Jam, and in addition to playing their own music, will accompany the other players.

“Part of the enjoyment I get is teaching other people to enjoy their music,” Clarence Heavner said.

The enjoyment factor is a big part of it, he said, because otherwise, students won’t want to do it.

And, like every music teacher, both the Heavners say the biggest challenge is getting students to practice.

But according to mom Kara Jacobusse, it’s not hard to get them out the door on Wednesdays.

“I have never once had to get after them,” Jacobusse said. “They’re excited to come here.” 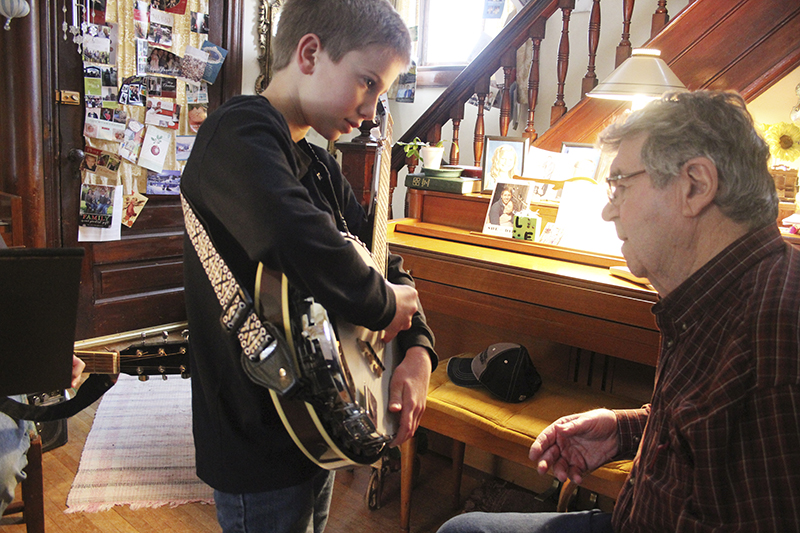 For Barbara Heavner, teaching is something she has loved since she began. It also keeps her busy and enjoying herself during retirement, she said.

“We want action,” she said of herself and her husband. “We want movement. People!”

And in their front room, that’s what they get.

“It would be so easy just to quit doing this — to just stop and do things for my own enjoyment,” Clarence Heavner said.

But he doesn’t. He said he’s addicted.

“I just don’t think I can quit,” Clarence Heavner said.