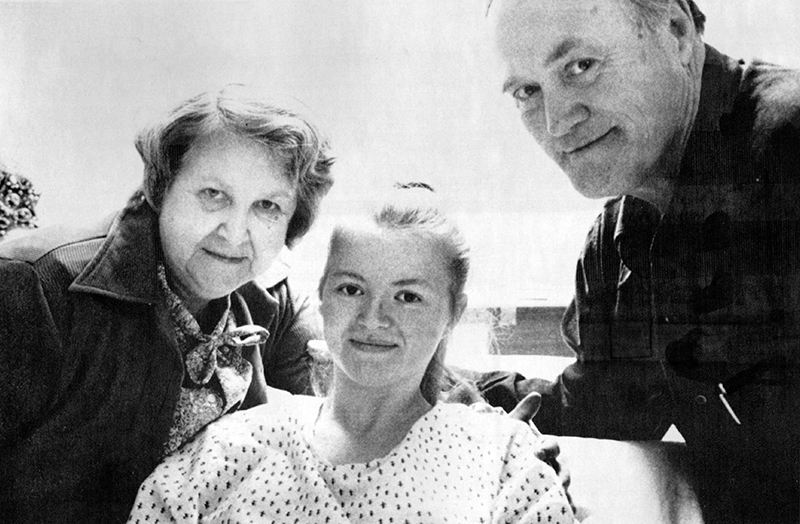 Jean Hilliard, center, rests in a Fosston hospital after she survived six hours in 22 below zero temperatures when she left her snow-bound car in December 1980. - Vickie Kettlewell via Star Tribune via MPR News

When you Google the small town of Lengby, there’s pretty much just one result that pops up, something that happened almost 40 years ago. The accounts online call it a miracle.

On the night of Dec. 20, 1980, 19-year-old Jean Hilliard’s car hit the ditch. She tried to walk for help. She was found in the morning in the front yard of a local cattle rancher — frozen solid as a log.

That’s not the miracle part.

That’s just what happens at night in Minnesota in the dead of winter. The reason this story is still circulating online, happened about 10 minutes from Lengby at the Fosston hospital, where Hilliard thawed out — and woke up.

Most coverage of her story is pretty theatrical. She got into an episode of the TV show “Unsolved Mysteries.” There was a dramatic soundtrack and fun, pulpy recreations.

Over the last 37 years, the story’s been told and retold on late night TV, and the sort of websites that investigate supernatural events.

When Hilliard tells her story, it’s more down to earth.

‘Froze stiffer than a board, but …’

“I had gone into town and met some friends,” she said in a recent interview with MPR News. “I headed home about midnight.”

Hilliard took a shortcut on an icy gravel road just south of Lengby. Her dad’s Ford LTD had rear wheel drive and no anti-lock brakes. It slid into the ditch. She knew a guy down the road, so she started walking.

It was 20 below that night, and she was wearing cowboy boots.

“I’d get over one hill, thinking his place would be there, and it wasn’t,” she said. “I was more frustrated than scared.”

Two miles later, she finally saw her friend’s house through the trees. Then she says, everything went black.

Later, people told her she’d made it to her friend’s yard, tripped, and crawled on her hands and knees to his doorstep. They said she lay there for six straight hours, with her eyes frozen wide open. Hilliard doesn’t remember any of that.

Those hours are a lot clearer for her friend, the cattle rancher and part-time butcher Wally Nelson.

These days, Nelson still lives nearby in Clearbrook, Minn., north of Lengby. He looks like a cowboy from the 1800s. He’s got gnarled hands and one eye that doesn’t quite track with the other. A horse kicked him in the head when he was young.

The morning he found Hilliard is sharp in his memory.

“I was so damn surprised when I saw that little hunk out in the yard,” he said. “I grabbed her by the collar and skidded her into the porch. I thought she was dead. Froze stiffer than a board, but I saw a few bubbles coming out of her nose.”

Nelson knew her pretty well. She was dating his best friend, Paul. The night before, they’d all been out together, drinking and dancing at the hottest spot in driving distance, the Fosston American Legion.

“At that time it was the place to go to,” he said.

Nelson brought a woman home that night. Then in the morning, he had to ask her to help load Hilliard’s frozen body into his truck. But she was too stiff to fit in the cab, so they had to take the woman’s car.

The butcher described it as a very awkward end to their night.

‘No one is dead until they’re warm and dead’

Doctors at the Fosston hospital did not have high hopes for Hilliard. They couldn’t even get an IV into her frozen arm. They kept breaking needles.

They figured she was mostly dead already, but decided to warm her up anyway, with heating pads. A devout member of the hospital staff called her pastor and started a prayer chain.

By midmorning, Hilliard woke in spasms.

By noon, she was talking coherently. In a handful of hours, she’d gone from a block of ice, to a scared teenager, worrying about her dad finding out his car was in the ditch.

The details seems pretty miraculous, although University of Minnesota professor of emergency medicine David Plummer says this kind of thing happens occasionally. He’s an expert at reviving people with extreme hypothermia. There’s no real data, but he’s handled about a dozen similar cases over the last 10 years.

“We have patients you can knock on like wood,” he said. “They feel rock solid frozen. That in no way dissuades us from the resuscitation attempt. And we do have a track record of success with that.”

In emergency medicine, Plummer said, “the dictum is no one is dead until they’re warm and dead.”

The strange part of Hilliard’s case, he said, is where she made her recovery, and when.

These days, doctors use a special device that pumps the patient’s blood through a heater, warming their vital organs from the inside.

In 1980 at the rural Fosston hospital, all they had were some heating pads and a lot of prayer.

The doctors considered amputating both her legs to avoid infection from frostbite. So when Hilliard went home with little more than blistered toes that were numb for awhile, it was national news.

She toured local churches. Talk shows flew her to New York City to tell her story: The miracle girl from Lengby, Minnesota.

“I was on the ‘Today’ show,” she said. “I was interviewed by Tom Brokaw. I took my mother on that trip. That was fun.”

But once the attention wound down, Hilliard said the experience didn’t really change the trajectory of her life.

She said she kept waiting for something dramatic to happen. Almost everyone she knew told her she was saved by a miracle. Those things are supposed to happen for a reason. But her life’s been normal.

She got married had kids, then later divorced. She lives in Cambridge, Minn., now and works at Walmart.

Things might have turned out differently Hilliard said, if she remembered the six hours she spent frozen in Nelson’s yard. If she’d seen anything.

“It’s like I fell asleep and woke up in the hospital,” she said. “I didn’t see the light or anything like that. It was kind of disappointing. So many people talk about that, and I didn’t get anything.”

She has no lingering health issues from the ordeal. These days, she doesn’t spend much time thinking about that night in 1980. She just bundles up, and doesn’t drive on icy back roads late at night.