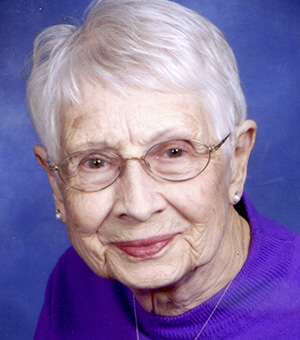 She was born on Jan. 3, 1926, in Algona, Iowa, the daughter of Ethan and Mary Jane (Rich) Light. She graduated from high school in Rake, Iowa, and attended Mankato Commercial College. Harriett married Howard L. Vandegrift on Jan. 20, 1945, and they made Albert Lea their home.

Throughout her life she worked at Wilson & Co., Universal Milking Machine, the Credit Bureau of Albert Lea and National Welding Supply, spending 30 years working outside the home.

Her real joy came from making a loving home for her husband, sons and grandchildren.

Harriett had fun-loving, adventurous spirit. Throughout her life she was blessed to have done many things most would have only imagined, including skydiving, motorcycling, diving in the Red Sea and scuba diving. She loved to travel, with her trip to Egypt being a very precious memory.

She was preceded in death by her parents Ethan and Mary Jane Light; her husband, Howard Vandegrift; sister, Virginia Nelson, and her husband, Don; and sisters-in-law, brothers-in-law and two nephews.

Harriett made a positive impact on all those whose lives she touched. Her kind, compassionate soul was always there to lend a hand, an ear and her heart.