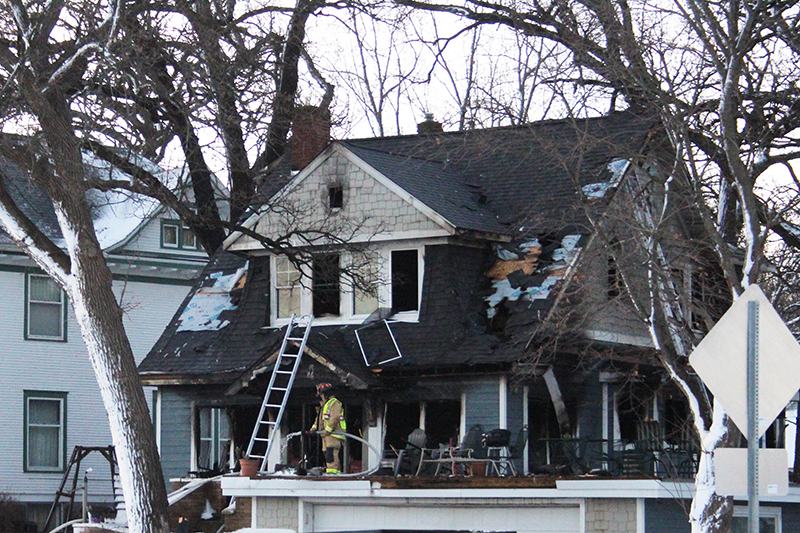 Two homeowners were injured and taken to the hospital after escaping a house fire on Lakeview Boulevard Friday morning, according to Albert Lea Fire and Rescue.

The fire’s cause is under investigation. Firefighters finish up on the scene after the fire at 449 Lakeview Boulevard.

The fire began at 1:42 a.m. Friday morning at 449 Lakeview Boulevard. When firefighters arrived, the front of the first floor was on fire with smoke coming out of the second story windows.

The residents, whose names have not been released, had already escaped from the house. They were taken to Mayo Clinic Health System in Albert Lea.

Firefighters were not able to enter the home due to the state of the floor and spent over six hours extinguishing the fire completely.

Moore said she was woken up by her daughter-in-law around 6:30 a.m.

“You could see the smoke just was still billowing out of the top,” Moore said. “I didn’t see any flames, but they were still out there fighting the fire and at that point, I didn’t know yet they were out of the house.”

Moore said a paramedic came over later and told them the two people did make it out of the house.

“To see the house, just to see how badly it was damaged, my heart just broke for them,” Moore said.

The whole structure of the house has retained damages estimated at over $128,000.

Moore, who is new to the neighborhood, said the experience has made her think about making better efforts to know her neighbors.

“I knew I wasn’t the best neighbor, but boy, all the sudden something like this just makes you think to take a little more time than just to wave,” she said.