Leo Vernon Schmidthuber played his last inning, passing away in his home the evening of Thursday, Jan. 4, 2018.

Leo was born in rural Worth County, Iowa, to Michael and Ragnhild (Lolla) Helland Schmidthuber on Oct. 20, 1918, the sixth of eight children.

Leo attended country school and then Lake Mills High School, where he was a multi-sport athlete, graduating in 1936. He played baseball in the Southern Minnesota League, a part of the St. Louis Cardinals organization. 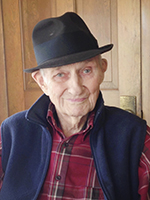 Leo served in the United States Army in World War II, spending much of his service as a member of a U.S. Army baseball team.

Leo married Margery Paulson on Oct. 14, 1944, at Salem Lutheran Church in Lake Mills while home on leave from the Army.

He served in post-war Japan, visiting Hiroshima, and talked about the damage done by the atomic bomb.

Leo traveled to Greenland in 1952 to work on Operation Blue Jay, constructing Thule Air Force Base in Greenland, a project that historians compare in size to the construction of the Panama Canal. He returned to Iowa to work at Wilson Packing Co. in Albert Lea and to farm with his brother, Horace, both on the family farm and on the land he and Margery purchased in 1948. He continued to play baseball on the Emmons town team.

Leo retired from Wilson in 1983 and from farming in the mid-1990s. In his retirement Leo worked as a volunteer ambulance driver and delivered Winnebago motorhomes all over the United States.

Leo was a voracious reader, and never lost his love of baseball.

He was pre-deceased by his parents; his wife; and seven siblings: sisters Gladys Lande, Irene Lande, Viola Gavle and Doris Stamatelos, and brothers Horace, Russell and Dale.

He is survived by one son, Michael, of Montana; daughters Jane (Steven) Noah, of Clive, Iowa, and Ann (Matthew) Spanjers of York, Nebraska; as well as grandsons Bart Schmidthuber of Montana, Andrew Spanjers of Nebraska, Jake Spanjers of San Diego, California, and granddaughter, Mariah (Aaron) Collmann, of West Des Moines, Iowa. One great-grandson, Parker Collmann, also survives him, as well as many nephews and nieces.

Memorials may be directed to Salem Lutheran Church in Lake Mills.

There will be a celebration of Leo’s life in Lake Mills when baseball season is in full swing.