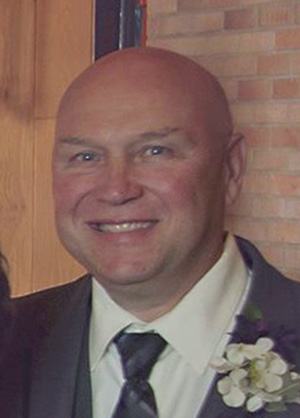 Mitchell Lloyd Thompson was born on March 11, 1963, in Albert Lea, to Steven and Diane (Tasker) Thompson. Mitch was raised in Albert Lea and was a 1981 graduate of Albert Lea High School. He spent many summers in his younger years at his grandparents’ cabin in Sherburn. He always loved fishing and hunting. Mitch attended the University of Minnesota-Duluth for one year. He finished his undergraduate degree with a bachelor’s degree in mathematics and a minor in coaching. He later received his master’s degree in education from the University of Wisconsin – La Crosse. Mitch worked as a math teacher in the Rushford – Peterson School District from 1986 until present.

He was united in marriage with Dana Morgan on Nov. 7, 1987, in Albert Lea,. While at Rushford-Peterson, Mitch was a boys and girls basketball coach, football coach and trap shooting coach. He was a member of Trinity Fellowship/First Presbyterian Church in Rushford, Trout Unlimited, Ducks Unlimited and Pheasants Forever. Mitch was a lifetime member of the Minnesota Football Coaches Association and was named the Butch Nash Minnesota Assistant Football Coach of The Year in 2006. He had the privilege to coach for Minnesota State football and basketball championship teams.

Mitch was very proud of his sons — their work ethic and their ability to give to their community. He thought it was very important to teach all kids to be a good human being. Mitch loved his wife and family dearly and he was a phenomenal papa to his grandchildren and grandpuppies. Over his 30 years as a teacher at Rushford-Peterson, Mitch and his family developed lifelong friendships with many staff, and Mitch viewed them as an extension of his family.

Mitch was preceded in death by his grandparents.

There will be a funeral service for Mitch at 2 p.m. Friday at the Rushford-Peterson School Auditorium. Visitation will be from 3 to 8 p.m. on Thursday at Hoff Funeral Home in Rushford.

Leave a memory of Mitch and sign his online guestbook at www.hofffuneral.com.