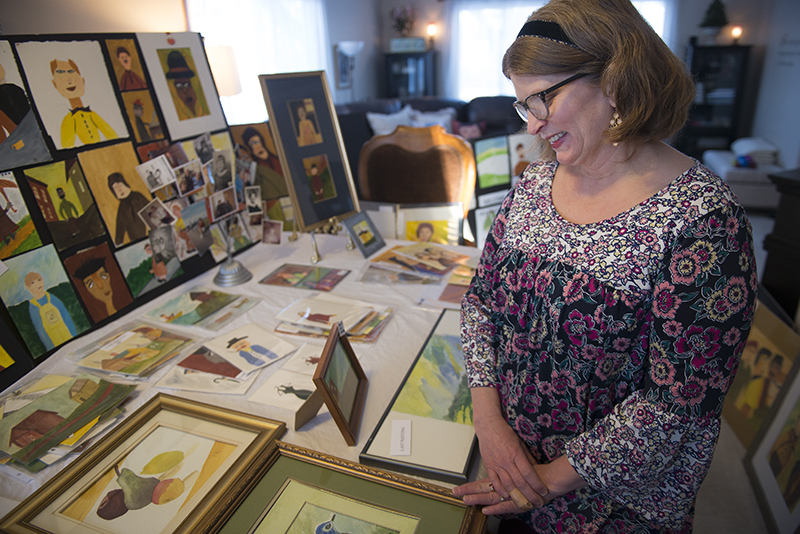 Robin Gudal has been combing through her mother’s approximately 200 pieces of artwork curating Janel Beckman’s final show before the pieces are dispersed among family members. Beckman was diagnosed with Alzheimer’s at the age of 55. - Colleen Harrison/Albert Lea Tribune

It’s a violent tear, racing its way down through the green hat brim and into the corner of the left eyeball, shearing a few lashes off, veering unexpectedly to the right and exiting in line with the wavy bottom lip. There’s another that crosses through where one might expect a nose — more deliberate in shape, cutting diagonally upward from the left to the right until it meets the other tear at the outer corner of the left eye.

This is the inspiration for the show title, “Fragments.”

“I named it ‘Fragments’ because she would rip things apart,” Robin Gudal said. She would hide things, too, sell them or throw them away.

The inspiration for the pieces? No one is quite sure anymore.

Gudal has been combing through her mother’s approximately 200 pieces of artwork — most of which are still very much whole — curating Janel Beckman’s final show before the pieces are dispersed among family members. Beckman was diagnosed with mild cognitive memory loss at age 55. She started painting two years later in 2003, several pieces at a time through what Gudal said was an unusually slow Alzheimer’s progression.

“I just think that, as the disease was overtaking her, it was her way to express things,” she said.

‘The sides can be really different’

Beckman is 73 now, living in a nursing home in the Twin Cities.

Gudal began working with her mother’s large collection of pieces at the request of her father, who asked that she give away her mother’s artwork to the family. The family had done three shows before — one in Albert Lea, one in Bricelyn and one in the Twin Cities — and decided to do this last one after a stray comment at Christmas about how enjoyable they had been.

That’s when Gudal started to see it. 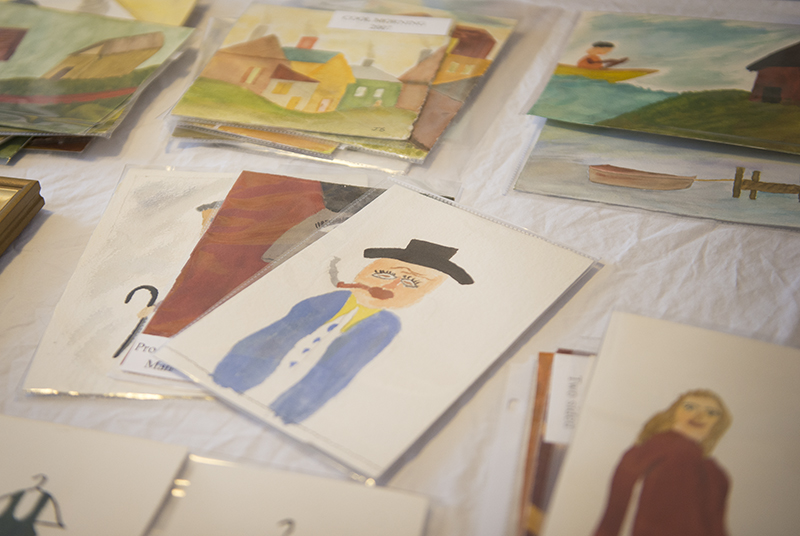 “As a family, it’s hard to see it until you have many pieces,” she said.

Now, she does. And she started noticing patterns about her mother’s work. Beckman would paint on both sides of a canvas.

“The sides can be really different,” she said.

Some of her pieces were signed in two spots. Gudal doesn’t know if this was related to framing, or to something else.

Gudal’s cousin recognized something different: herself. When the cousin began tearing up after looking at one of Beckman’s paintings, Gudal asked what was wrong.

Since then, family members have looked through pieces and caught more glimpses of someone familiar.

“There’s just different ones that we’ll look at and we’re like, ‘I wonder if…’” Gudal said.

When her mother could say, she wouldn’t. As Beckman traveled further into Alzheimer’s, Gudal said she wasn’t sure if her mother could put the names and faces together — if the paintings were representative of people she didn’t know she knew.

“It’s been amazing to see it all collectively,” Gudal’s sister, Anna Beckman Almerico, said. “I hadn’t, I guess, thought of it in the larger scope of what she’s done, and it’s kind of neat to see these progressive periods, progressive time periods of art.”

It started with row houses, Gudal said, like ones her mother had seen from living in Boston. Beckman worked her way through groupings of people, then to individuals. Then things got darker — “big and wild,” Gudal said.

“As a family member, it was just bizarre to look at,” she said.

Her mother painted women in stark reds, yellows and black with hair rushing out of their scalps. One woman’s multi-toned tresses start behind one earlobe and loop themselves up and around, following the curve of the scalp until they diverge from the head’s circumference and escape the canvas through the upper left corner, out into the beyond.

“It was, I think, part of her angry stage,” Gudal said — the stage when Beckman would catch herself repeating things, missing things, and apologize over and over.

“She was so aware of what she was not aware of,” Gudal said.

Beckman Almerico said her mother was the one to expose her to art, Russian literature and theater.

“I loved seeing her space where she would paint,” she said. “She had all these brushes and mixed a lot of different colors in palettes and had pieces in various stages.”

She sees Beckman’s paintings as a physical expression of her explorative spirit. It’s unique and folksy, Beckman Almerico said, but there’s depth there, too.

“She wasn’t trained professionally, and so all of it really is organically her — her own thing,” Beckman Almerico said.

She said the show is a great reflection of the years Beckman spent painting.

“It feels like we’re honoring her in that, honoring the creativity that came out,” Beckman Almerico said.

Gudal said she also hopes the show can change some of the conversation about Alzheimer’s as it becomes more and more prevalent.

“I think from a community standpoint, I think just the fact of seeing the value and the blessing that has come out of Alzheimer’s,” Gudal said. “And it’s drawn our family closer together, and just the gift we’ve gotten from it. Because we wouldn’t have the artwork.”

But Gudal sees a stigma with Alzheimer’s. People may be embarrassed a family member has it. Just like her mother’s pieces, Gudal watched her mother, too, move through stages. Gudal has seen how, through these behavioral changes, Alzheimer’s affects relationships.

But “Fragments” isn’t about that.

“For us, this is kind of a way of celebrating the pieces of what she has left in her,” Gudal said.

One of Beckman’s final pieces is a soft landscape with feathered, almost blurry edges. The tree greens melt into the sky blues, and they mingle there, holding each other. 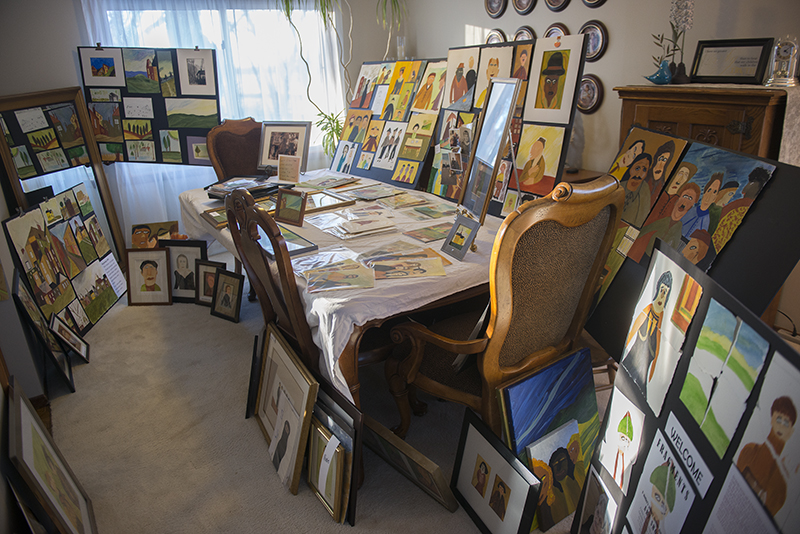 Robin Gudal has been combing through her mother’s approximately 200 pieces of artwork curating Janel Beckman’s final show before the pieces are dispersed among family members. – Colleen Harrison/Albert Lea Tribune