‘She takes care of me, and I take care of her’ 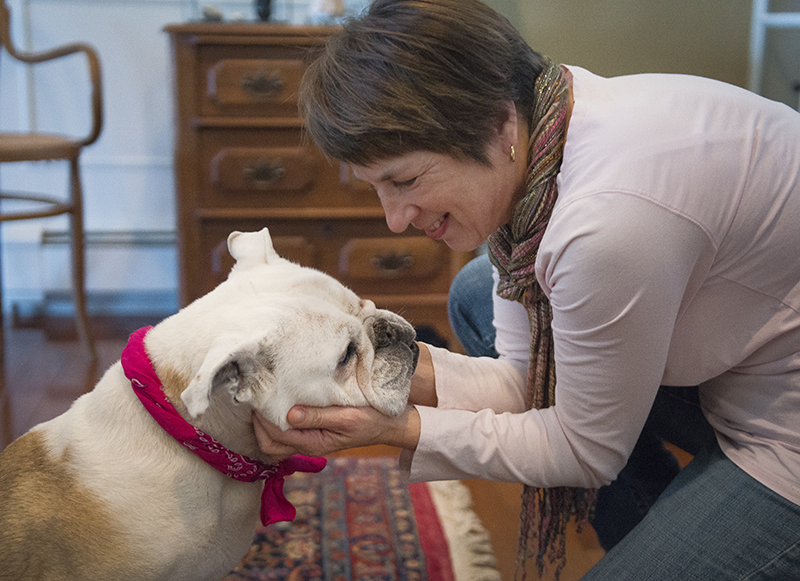 Jane Kepple Johnson has a 14-year-old English bulldog named Gracie. Originally more her husband’s dog, Johnson said Gracie and she have bonded since her husband passed away in August 2016. - Colleen Harrison/Albert Lea Tribune

Gracie and Pete were fast friends, but when Pete passed away in August 2016, it would be Jane and Gracie who would share a bond.

“She was truly Pete’s dog. She followed him everywhere,” Johnson said. “She was right by his side.” 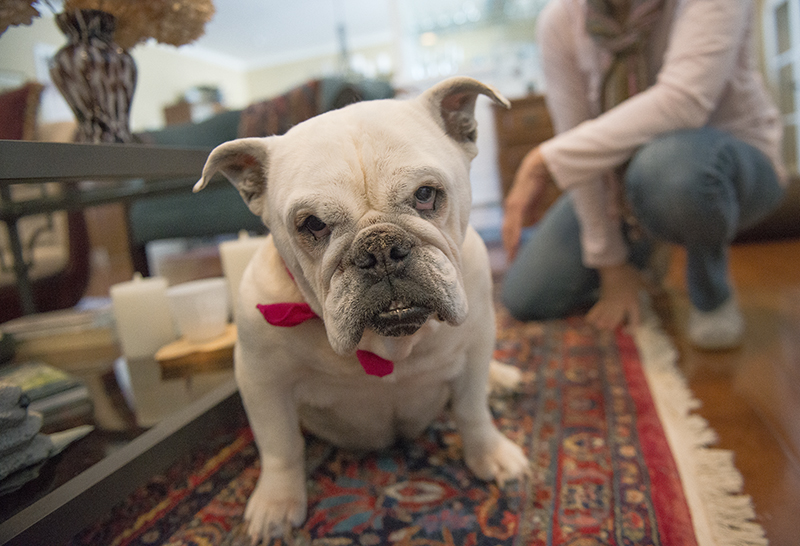 Johnson said Gracie being 14 years old is impressive for a bulldog, as they typically have a life expectancy of about eight years. – Colleen Harrison/Albert Lea Tribune

The couple bought Gracie from a breeder when she was about 1 year old. Johnson’s husband had fond childhood memories of his grandfather’s bulldog, and when the couple was first married they had a bulldog named Spike. They had some rescue dogs in between, but Pete found himself wanting another bulldog.

Gracie was supposed to be a breeding dog, but apparently didn’t take much to motherhood after having her first litter of pups. This led to Gracie’s original owner having her spayed and putting her up for adoption.

Gracie is now 14 years old, an impressive feat for a bulldog, according to Johnson. She said the typical life expectancy for a bulldog is about eight years. She credits Gracie’s good health to keeping her weight down. 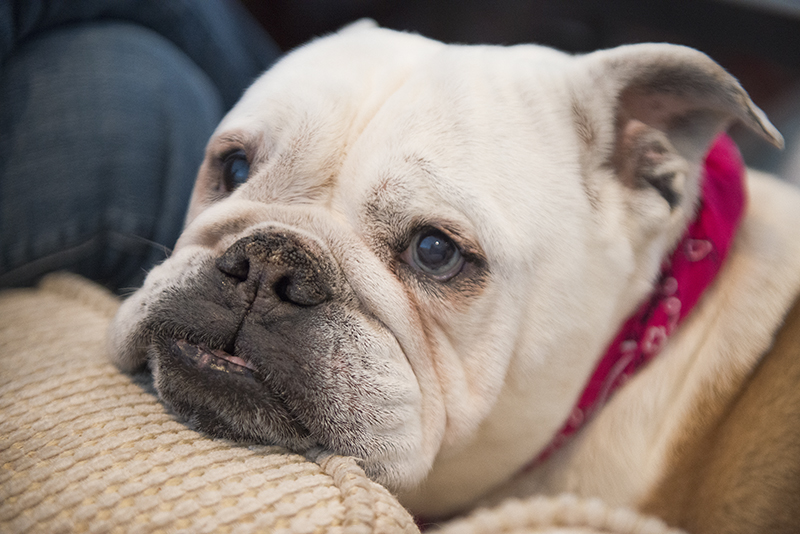 Gracie has two different-colored eyes — one blue and one brown — referred to as heterochromia. – Colleen Harrison/Albert Lea Tribune

Johnson said Gracie is the perfect dog for a retiree like herself, being laid back and low maintenance. She said Gracie loves being around people, so much so that Johnson has placed dog beds throughout the house so that Gracie can be comfortable while following everyone around. She’s a sweet dog, Johnson said, and really only goes into “mama bear” mode if another dog comes into her yard. Gracie enjoys riling up Johnson’s two cats, and sometimes they even team up together to steal food, Johnson said.

While Gracie still gets around pretty well for a senior dog, she does have moments where her age shows. She’s a bit more hard of hearing now, and she had a minor stroke last spring. She bounced back from the stroke, but not before Johnson warned her three children that Gracie’s time might be coming. She said her children are all pretty close with the dog, and see Gracie as their last connection to their dad.

Johnson said she always liked Gracie, of course, but they became much closer after her husband’s passing.

“We have become closer,” she said. “We have learned to tolerate one another’s quirks, and we’ve nurtured a relationship, finding solace in it.” 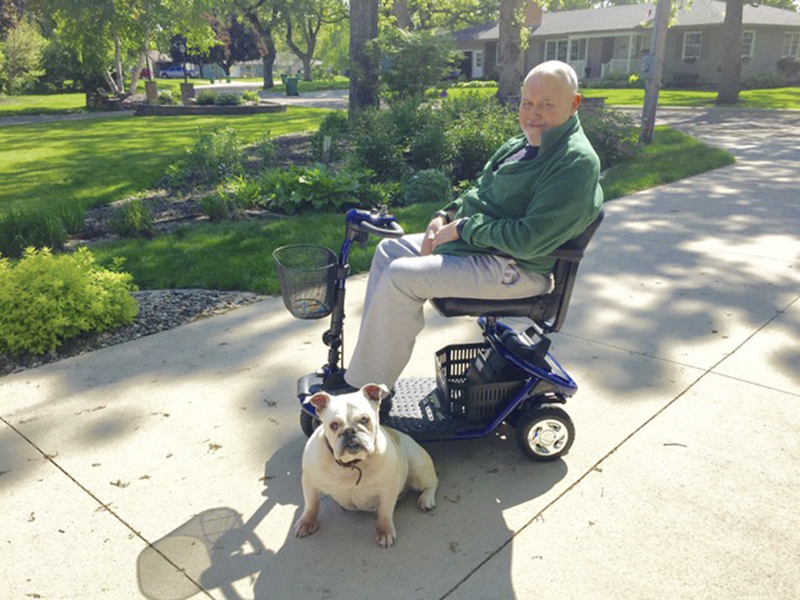 Johnson was her husband’s caretaker for most of their 30-plus years of marriage. Her husband wasn’t very mobile, so he was home a lot to spend time with Gracie. After he passed away, Johnson said the family pets had to get used to not always having someone home.

After Pete’s passing, Johnson said it was obvious how much Gracie missed him. At first she’d walk around looking for him, and at one point climbed up into Johnson’s lap like a cat when she couldn’t find him.

“She and I were kind of in the same boat,” Johnson said. “We’d both lost someone we loved and cared about.”

Gracie has been a constant comfort since Johnson lost her husband.

“She’s just always there,” she said. “Fourteen years of being there and being present, and you know, the last link to Pete, really.”

“She takes care of me, and I take care of her. … I think Pete would be proud.” 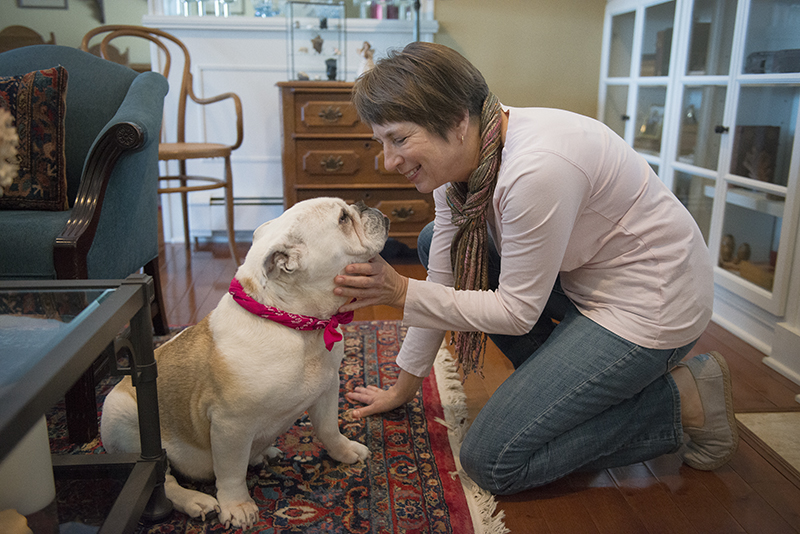 She’s just always there,” Johnson said of Gracie. “Fourteen years of being there and being present.” – Colleen Harrison/Albert Lea Tribune