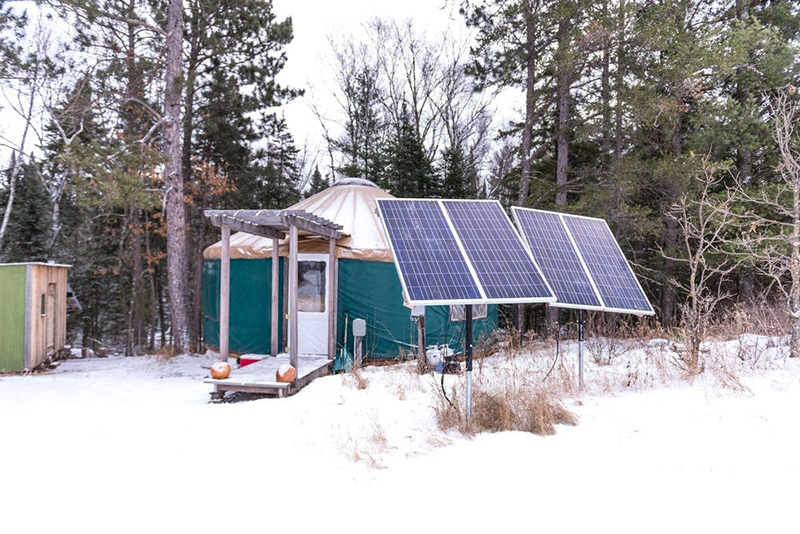 Solar panels outside a yurt are pictured near Bemidji. - Matthew McLaughlin/For MPR News

The Canadian company Heliene Inc. is expected to receive up to $3 million in state loans to expand its solar module facility on the Iron Range, just as the Trump administration has set steep tariffs on imported solar panels in a bid to boost American manufacturers.

But the company’s president said the new import restrictions would not help the Iron Range plant, the last remaining solar panel manufacturer in the state.

The Iron Range Resources and Rehabilitation Board is expected to approve its share of the loan at its board meeting Wednesday. The IRRRB would fund half the loan, with the rest coming from the state Department of Employment and Economic Development.

Heliene is proposing to invest nearly $6 million of its own capital on a new equipment line at its facility in Mountain Iron.

Up to $1 million would be forgiven by the state if the company employs 70 workers after four years.

Heliene, which is based in Sault Ste. Marie, Ontario, moved into a facility owned by the city of Mountain Iron last year, after it was vacated by another solar panel manufacturer called Silicon Energy.

Silicon is one of several U.S. solar manufacturers to close recently, unable to compete with cheap imported solar components.

“We know there is some risk to this project because it is in an industry that has taken a nosedive on the pricing,” said Steve Peterson, executive director of development at IRRRB. “But there’s still a viable market for solar panels out there, so we think it’s going to be a successful one.”

Peterson said Heliene is better positioned to succeed because it sells panels to utility scale operations like solar gardens, not rooftop installations.

Silicon sold many of its panels through a state subsidy called the Made in Minnesota solar incentive program, which was repealed during the 2017 legislative session.

“We have sold in many different jurisdictions, so that if one market doesn’t grow, we don’t lose everything,” Pochtaruk said.

Heliene manufactures most of its panels in Canada, which has been excluded from the 30 percent tariff the Trump administration has approved on imported solar modules, to be phased out over four years.

But Pochtaruk said the factory he’s building in Minnesota will be too small to benefit from the new import restrictions.

He said larger American manufacturers may benefit, but he expects the industry as a whole to suffer, because the installation of solar panels is expected to decline as panels rise in price.

“It is good news for the American made product,” Pochtaruk said. “It is not good news for anybody else. This will certainly mean, not a stop, but a very large stumbling block for solar development.”