Funeral services for Todd James Schumaker of Albert Lea will be at 1:30 p.m. Friday at Grace Lutheran Church of Albert Lea. The Rev. Shane Koepke will officiate. Visitation will be from 4 to 7 p.m. Thursday at Bonnerup Funeral Service and one hour prior to the service at the church. Interment will be in First Lutheran Cemetery in Ellendale. Military honors will be accorded by Albert Lea area veterans groups. 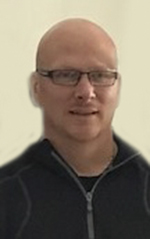 Todd was born March 9, 1969, in Wells, the son of Melvin and Phyllis (Akemann) Schumaker. He graduated from Glenville High School and served his country in the U.S. Army.

On Nov. 15, 1997, he was united in marriage to Nikki Toft at Zion Lutheran Church in Albert Lea.

Todd had been a member of Grace Lutheran Church in Albert Lea, the Glenville American Legion and was a Freeborn County resident most of his life. He had been employed by the Minnesota Corrugated Box company as a supervisor for over 28 years. In his free time he enjoyed working on cars and motorcycles, lawn and home improvement and anything related to military history. The best times were spent with his family and attending his sons’ sporting events.

He was preceded in death by his grandfathers.