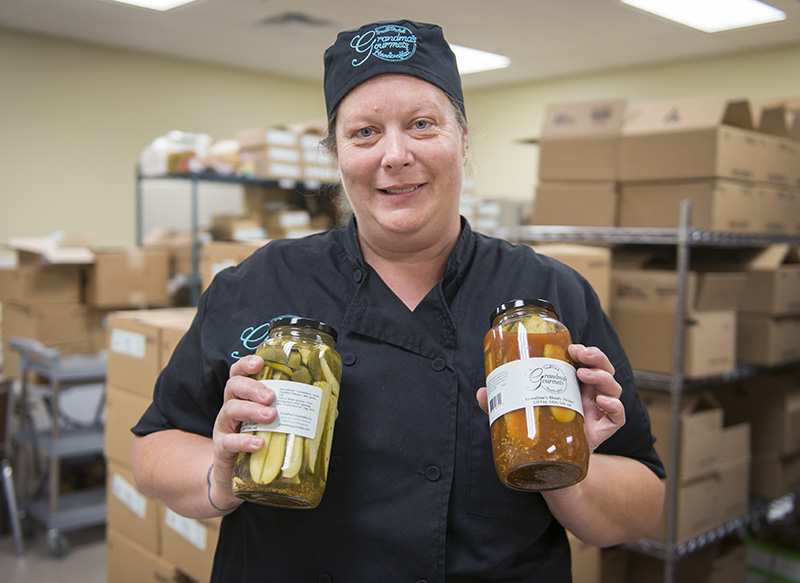 Grandma's Gourmets Bloody Pickle, right, was chosen as one of three regional winners in the 2018 Good Food Awards. Kim Olson said she spent about a year perfecting the recipe. Colleen Harrison/Albert Lea Tribune

After three years submitting her Bloody Pickles at the same competition, the owner of Grandma’s Gourmets finally put the lid on victory in 2018.

Kim Olson, who owns Grandma’s Gourmets in the Albert Lea Business Development Center, said it was important to her to win with this particular pickle at the Good Food Awards because of how unique it is and how much effort she put into it.

“I think it’s something no one else makes,” she said. Olson’s Bloody Pickle is what she calls everything good about a Bloody Mary without the vodka (and in a pickle, of course).

Grandma’s Gourmets’ Bloody Pickle was one of 15 winners in the pickle category across the United States. The Good Food Awards chooses three winners in each of five regional categories.

“It’s like the Cadillac of food awards,” Olson said.

This was the first year she won, but her Bloody Pickles had been finalists before. Olson also won a 2017 Good Food Award for her Spicy Maple Bread and Butter Pickles.

Even submitting a pickle for the award can be quite a process, Olson said. The Good Food Awards put an emphasis on local and sustainable food.

“Pickles is one of the most interesting because of the emphasis on the local component,” Good Food Foundation communications manager Annalena Barrett said. They also look at respect for seasonality.

Each of the 15 categories has different sustainability criteria, but the baseline is that the products are free of genetically modified ingredients.

Olson said all of her pickle ingredients were vetted and her suppliers were called about what was being put into that pickle.

“No other food award I’ve ever won has gone this in-depth,” she said.

Now that she has achieved the victory she has re-submitted for, Olson said there’s a lot of thinking about what comes next. She wants to figure out how to go into distribution with the pickles without losing the sustainable and local emphasis.

“I think it’s important to tell the story of Minnesota via food,” Olson said.

It took Olson about a year from the time she conceptualized the Bloody Pickle to the time she perfected the recipe. At the time of her inspiration, Olson had been bartending in her free time at a place that had a Bloody Mary bar.

“What fun is it if you’re making the same thing as everybody else?” she said.

Olson’s Bloody Pickles are for sale at Hy-Vee gas or by direct order.