Funeral services for Alice M. Olson will be at 10 a.m. Saturday at St. Theodore Catholic Church in Albert Lea. The Rev. Kurt Farrell will officiate. Visitation will take place from 4 to 7 p.m.  Friday at Bonnerup Funeral Service in Albert Lea,with a time to share memories at 7 p.m. Visitation will also be one hour prior to the service at the church. Burial will be in St. James Cemetery in Twin Lakes. 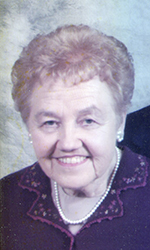 Alice died peacefully surrounded by her family Friday, Feb. 23, 2018, at St. John’s Lutheran Community in Albert Lea. She was 87.

Alice M. (Leska) Olson was born July 22, 1930, to Alois and Antonia (Foral) Leska near Comstock, Nebraska. Her early years were spent in Custer County, Nebraska. Growing up, she also lived in Omaha, Wyoming and Utah, then back to Omaha where she graduated from South High. She went to college for business training, then worked as a secretary for seven years at St. Columban Missionaries.

On Jan. 15, 1955, Alice was united in marriage to Orren E. Olson at St. Wenceslaus Catholic Church in Omaha. They resided in nearby Bellevue for several years. In 1967, the couple and their family moved to a farm near Alden, which they called home until moving into Albert Lea in 2008. Alice and Orren were blessed with eight children.

Aside from raising her family, Alice worked nights as a nurse’s aide at Lake Mills Care Center for 21 years. When she wasn’t working or taking care of her family, you could probably find Alice doing something at St. James Catholic Church in Twin Lakes. That was her home away from home, where she stayed involved in the church for many years. Alice and Orren then attended St. Theodore Catholic Church.

While her children were growing up, Alice became very involved in 4-H, where she spent many years as a 4-H leader and was always a part of the rabbit project at the county fair. Alice also enjoyed gardening, canning, cooking and baking. Alice and Orren used to go dancing — it was their favorite activity together. A special trip for the couple was going on a dance cruise in the Caribbean for their 40th anniversary. Alice could be described as a hardworking, giving and thankful person. One thank you was never enough, it was always “Thank you, thank you, thank you!” She was sweet, kind, generous and — most of all — she loved her husband, children and grandchildren.

She is preceded in death by both parents, Alois and Antonia Leska; siblings Joseph and Lillian; and a son-in-law, John Pollack.