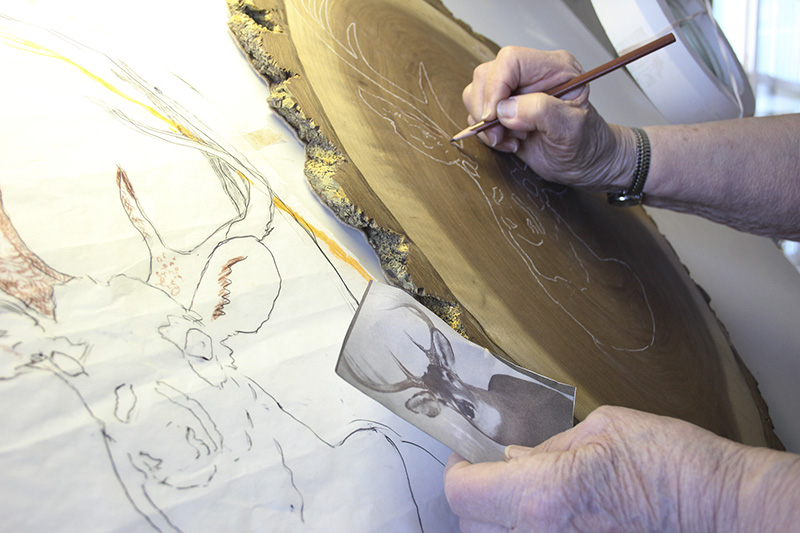 Joy Behr sketches out some shading before she paints over it. She’s working on a specific deer: one hanging on the wall of the man who has stored her black walnut slabs since she moved to St. John’s on Fountain Lake. - Sarah Kocher/Albert Lea Tribune

When she was considering her move into St. John’s Lutheran Community on Fountain Lake, one local artist couldn’t decide which side of the hallway to live on.

She settled on the east side so she could catch the sun in the morning.

“Her interest was that light,” director of public relations and fund development Diane Wichmann said.

That light comes through a full-length window and illuminates a white drafting table holding an oval slice of black walnut. On that walnut is the outline of a deer, a thank-you for the man storing the slab’s siblings for Behr now that she lives at St. John’s. Joy Behr works at a lighted drafting table near the window in her apartment. – Sarah Kocher/Albert Lea Tribune

Behr traces the start of it all back to one pencil.The Watkins man would come to her mother’s house and the two would barter. He had something for Behr, too.

“He gave me a nice big pencil with an eraser on it,” Behr said.

Fast forward to next month, and Behr will be having an art show at St. John’s for residents.

“I feel humble about that,” Behr said. “I don’t feel like I’m somebody special.”

It’s nice, though, to have people ask her about her art and to want to see it, she said.

After years of drawing, painting beginning in high school and wood burning, Behr is working largely in acrylics. She took correspondence courses, traveled to Mankato for classes and has a certificate from an art instruction school in Minneapolis.

“It keeps me out of mischief,” Behr said of her continued artwork. It can also be rewarding to have success on a piece she’s been working on and to get lost in her art.

“I get into that, I don’t think about problems,” Behr said. “It helps you relax and enjoy your thoughts.” 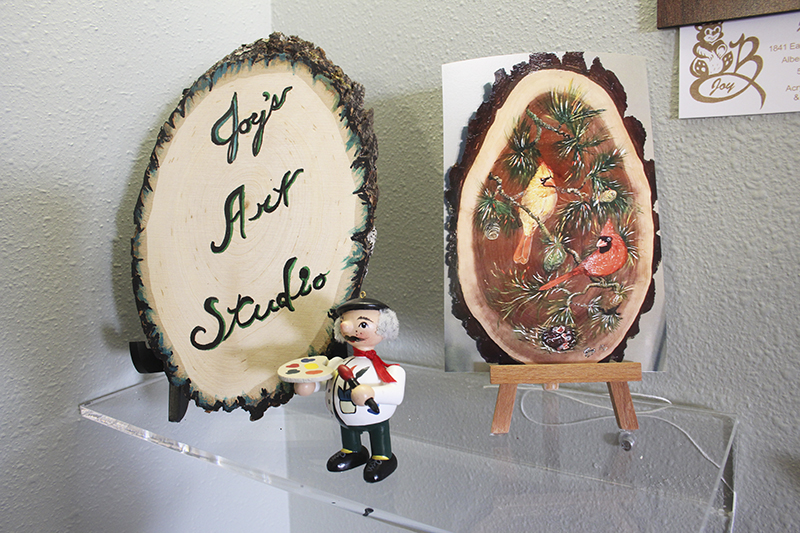 Outside Joy Behr’s apartment at St. John’s, she’s displayed a photo of one of her recent pieces. Behr said she went back and forth looking at apartments on the east and west side of the building, deciding which would give her the best light in her apartment. -Sarah Kocher/Albert Lea Tribune

“I like to learn about watercolor because it’s so mild, so soft,” Behr said. It’s not as definite as some other mediums she’s worked with.

It’s not the most unusual, though. Behr has several pieces painted onto splatter-like slices of a cypress trunk she and her husband picked up at a gas station. There were also the handful of ostrich eggs she bought from a neighbor who raised some.

“I wish I’d have bought the whole box,”  Behr said. She had to paint them twice, because the first day the paint ran off. The insides had been blown out, but the porous shell hadn’t dried enough to hold the paint. Now, those eggs have local churches on them.

In her apartment at her drafting table, Behr now works about an hour a day. She moved to St. John’s in July and is just getting back into her art after taking care of the move.

“There’s times in your life when you can’t play,” she said.

There’s a slew of ideas tucked away for when she does get the chance to play, though. Hidden underneath a brilliantly green potted plant is a set of plastic filing folders, blues and pinks. Each of them is labeled with a letter — except, of course, the one simply labeled “parrots.”

These are Behr’s inspiration folders. When she sees something she likes — a color scheme or a subject idea — she files it away. She’s got magazine pages and photographs sorted alphabetically by subject matter.

Behr said she’d like to do more painting, but she also wants to take time to meet new people in the community.

Sometimes, the stories others tell her give her ideas for her art, just like parrots in a file folder.

“I learn from them, too,” Behr said of her fellow residents.

“That’s what I think is remarkable, is you have a gift and you continue to use that gift,” she said to Behr.

Behr said one of the most rewarding things about her art is passing that gift onto others. She’s spoken with children about her artwork in schools, and she loved hearing them tell her they wanted to do what she did: “‘I’m gonna get me a pencil and I’m gonna start drawing.’”