Clarice (Kelly) Christianson Falk was born in Aberdeen, South Dakota, and grew up in Underwood. She loved school and graduated valedictorian of her class.

Living through the Great Depression was one of the defining features of her life. Her good-hearted father owned the town’s grocery store in which she worked and found it hard to collect what was owed to him. She earned her way through the two-year teacher’s training at Moorhead State and became a supervisor of student teachers in the middle school training school, Gunderson School, near Moorhead. One day, in walked Charles Christianson, county superintendent of Roseau County, as part of a delegation that had come to observe her class. She moved to Roseau, taught at the Swift School and married Charles in 1941. With Charles, she raised five children — Coralie, Rachel, Brian, William and Sara — coaching them through their 4-H endeavors, musical training and school pursuits. After Charles died, she married Helmer Falk and helped raise his daughter, Cindy. 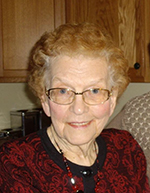 When the children were old enough, she resumed teaching grade two at the Roseau school, and through summer school at Moorhead State completed her four-year degree.

She finished out a long career at the school as the district’s planning, reporting and evaluation coordinator at the age of 81.

In 2013, Kelly was awarded the Minnesota Senior Citizen Volunteer Award based on a lifetime of service to the community: teaching grade two at the Roseau school, as a consultant for the Malung, Roseau and Wannaska schools and director of state-mandated programs, beginning with Right to Read. She served as first woman president of the local teachers association and as a board member of the Northern Division of the Minnesota Educators Association.

She was a longtime member of Roseau Garden Club, a county fair exhibitor, a supporter of the 4-H Club, participated in city beautification and worked at the spring plant sale. When The Roseau Friends of the Library was organized, Valborg Tweet and she were the co-chairwomen. She was a member of the first Roseau Book Club, obtained training sessions by the Great Books organization for volunteers to be discussion leaders and helped with the production of the Regional Ramblings for local authors and artists since its inception.

She was active in and an officer for the American Legion Auxiliary, Sons of Norway and the Alpha Xi chapter of Delta Kappa Gamma. She was a member of Messiah Lutheran Church, sang in the choir, quilted for missions, led the cradle roll program, served as local president and was on the board of the northwest board of Women of the Evangelical Lutheran Church Association. She sang in the American Legion Auxiliary Trio that won first place in the state contest. Unforgettable was her comedy act “Hildegaard,” performed at 40 different locations in Roseau County, around Minnesota and in Canada.

Although the Senior Citizen Volunteer Award perhaps delighted her most, she was awarded many others in her lifetime: Minnesota Teacher of Excellence in 1973, the Governor’s Certificate of Commendation in 1989, the Minnesota State Horticulture Society Gold Medal Award in 1997, Roseau Teachers Association Friend of Education Award in 1998 and, with Charles, the Roseau School Hall of Fame Award.

When she moved into Oak Crest Senior Housing at the age of 96, she organized and accompanied on piano a resident choir of 18 women they dubbed the Melodears, which has given regular community concerts at Oak Crest.

Kelly was preceded in death by her parents Gerhard and Cora Haukebo; her son, Brian; and all but one of her eight siblings, Norma (Delbert) Rubink, Grace (Carl) Landin, Marian (Max) Powers, Cathy, Frances (Dewey) Bergquist, Gerry (Doris) and Noel (Jennifer) Haukebo.

The family would like to thank Dr. Brummer and the staff at Roseau Manor.

Donations may be made to The Roseau Friends of the Library or to Messiah Lutheran Church.

A service for Kelly, to which all are invited, will take place later in the spring.