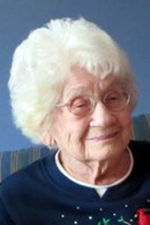 Frances was born Nov. 18, 1918,  in Millheim, Pennsylvania, to Oliver Bruce Shawver and Elsie N. (Pressler) Shawver. She graduated from east Pennsylvania’s Valley High School in Millheim. She married Marlin Frederick Herman on June 27, 1940. They celebrated their 73rd wedding anniversary before her husband died in January 2014.

During World War II she worked at a hosiery mill in Pennsylvania, filling in for men serving their country. She was an excellent seamstress, making clothes for family members. She spent years in the altar guild at Trinity Lutheran Church in Albert Lea and loved to golf, playing her last round when she was 90. She lived with her husband at Fairview Place in Olivia before spending her final years in the memory care unit.

Frances is preceded in death by three brothers and her parents.

A memorial service will take place at a later date.

Arrangements are by Dirks-Blem Funeral Service of Olivia.