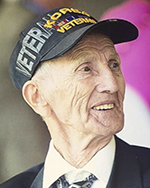 He entered military service in the United States Army on Jan. 16, 1951, during the Korean War. Following his honorable discharge Dec. 16, 1952, he returned home. He was united in marriage to Charlene Lester on Oct. 4, 1957, at Geneva Lutheran Church. Lloyd and Charlene lived in Freeborn before moving to Austin in 1963. In October 1968 they moved to the farm they purchased north of Austin.

In his early years Lloyd worked as a butter maker in Clarks Grove and Otisco. He later worked as a mechanical tradesman for various businesses before starting his own mechanical business. In 1970 Lloyd began a long career with Farmstead Foods, formerly Wilson & Co., in Albert Lea, and retired in 1989 after 18 years of service.

His true passion was farming — he loved working in the fields, raising cattle and baling hay. He was a member of Albert Lea American Legion Post No. 56 and Albert Lea Disabled American Veterans Glaydon Iverson Chapter No. 16. Lloyd was always eager to help family and friends whenever needed, and enjoyed tractors, the outdoors and tinkering.