Looking for a trip to the state tournament 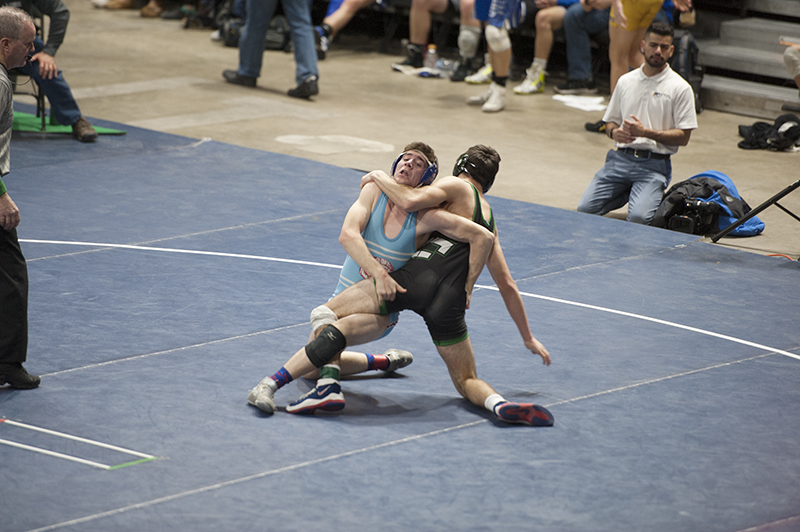 ROCHESTER — The Albert Lea wrestling team traveled to Rochester on Friday to take part in the opening rounds of the Section 1AAA individual tournament.

Fourteen Tigers started the day with a chance at going to the Minnesota state tournament next weekend and 11 finished the first day with those hopes still intact.

Junior Cristian Garcia started the day for the Tigers as the only wrestler on the team to compete in the opening round. He would lose the match by fall in the first period and move to the consolation side of the bracket.

Next up was seventh-grader Cole Glazier to start the quarterfinal round of action. He was able to grab a 6-0 decision win and move on to the semifinals taking place Saturday morning. Eighth-grader Cameron Davis would join his teammate with a win just a few moments later with a 16-1 technical fall.

Eighth-grader Carter Miller would drop his match at 120, falling to the consolation side of the bracket. Senior Jake Johnsrud would set the Tigers back on the winning track with a 21-6 technical fall, sending him to the semifinals. 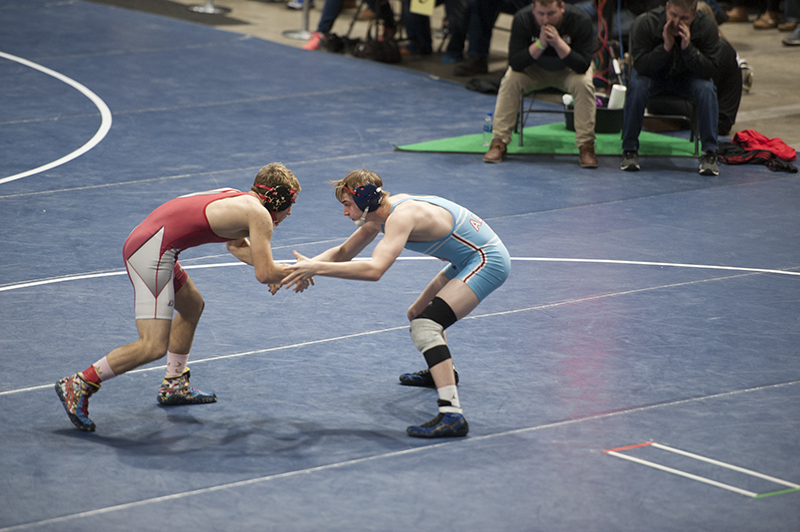 ​Albert Lea senior Ty Harms looks for an open shot against his opponent in the quarterfinal round. Harms would win the match via pinfall in the final 10 seconds of the third period. – Tyler Julson/Albert Lea Tribune

Senior Gavin Ignaszewski picked up a quick win, getting a pinfall in 37 seconds. He was followed by senior Logan Donovan, who lost a tough-fought match via a 7-2 decision. Seniors Ty Harms and Brody Nielsen would notch two pinfalls back-to-back for the Tigers. Harms got the fall with only seven seconds left in the match, while Nielsen got his win just over a minute into the first period.

Senior Levi Kermes would fall in his match at 160 via a 11-0 major decision, landing him in the consolation bracket. Senior Zach Glazier received a bye in both the first and quarterfinal rounds, putting him in the semifinals.

Senior Spencer Indrelie and junior Brady Nielsen would each move on to the semifinals with wins in their matches. Indrelie won by pinfall in the third period and Nielsen won by a 5-1 decision. Senior Jaime Valdez fell in his quarterfinal matchup via pinfall in the first period.

Donovan would win his consolation quarterfinal with a fall at 3:04 and keep his tournament chances alive. Kermes picked up a pinfall in the second period after starting the period down by two points.

Valdez would fall in his consolation by fall in the first period, seeing his season come to an end.

Of the 14 that started the day, 11 are still vying for their place at the state tournament — nine in the championship bracket and two in the consolation bracket. Wrestling resumes at 10 a.m. Saturday with the semifinal rounds. Check back with the Tribune for tournament results as they become available. 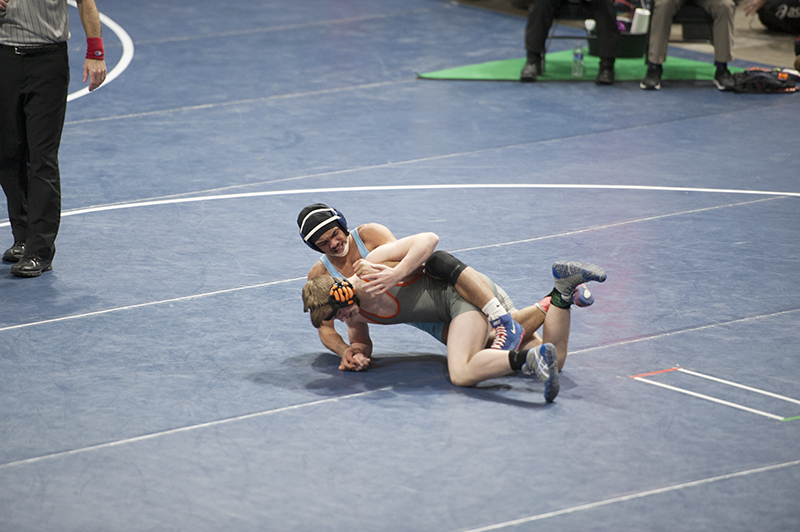 Albert Lea senior Logan Donovan attempts to pull his opponent over onto his back during the quarterfinal round. Donovan would lose the match, 7-2. – Tyler Julson/Albert Lea Tribune