‘Meeting a standard is where we want all kids to be’ 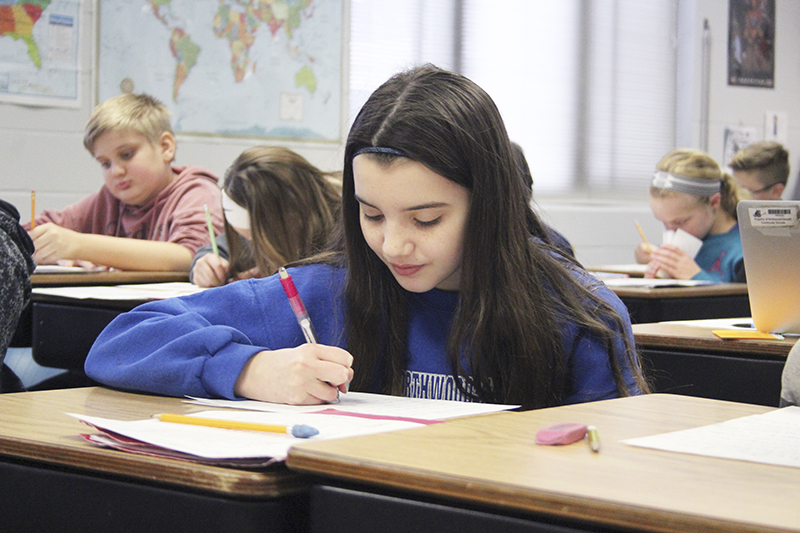 NORTHWOOD — It’s a serious black binder, three-ringed and well-filled. On one of the inside pages is a kindergartner’s chart about capital letters. The bottom portion is filled out with vigorous strokes of red, moving horizontally through ascending box after box and transitioning through colors until it hits the slabs of blue at the top, just underneath a star with rounded, cartoonish edges.

The chart is in one of the data binders that showed up in Nichol Hebel and Alyssa Hanna’s kindergarten classrooms at Northwood-Kensett Elementary School when they piloted the school’s current standards-based grading system in the 2016-17 school year, a change instituted school-wide in the fall.

“A lot of times we have parents asking, ‘What does my kid need?’” Northwood-Kensett Elementary School principal Brian Costello said. “‘What can I help them with?’”

With the standards-based system, the school is trying to be more transparent in telling them. Despite lifetimes of grading with the A-F system, what an “A” means isn’t always clear.

So, Northwood-Kensett Elementary School replaced the As.

According to Hanna, the school’s teachers were teaching to the Iowa Core, but the old report card wasn’t set around those same standards. She and a previous kindergarten teacher went through the standards and chose their priorities. Hanna and Hebel piloted them.

“They were ready,” Costello said — ahead of the curve.

In the greater scope of Iowa education, however, many schools have already made the switch to standards-based grading or are in the midst of the transition already, too. Costello said a lot of schools were doing this when the Iowa Core came out. According to the Iowa Department of Education, that was in 2008.

In addition to changing the letters, the school has also replaced the scale the former letter grade system utilized. Costello noted that anything below a 60 is traditionally worth an F. From one to 59 is a large part of a 100-point scale.

Instead, the school assesses with a 3, 2 and 1, and on a basis of progress rather than score averages.

An example: “There might be five assignments on that particular skill,” Costello said. “The first one, they might get a one, but the second one, they get a two. Third, fourth and fifth one, they’re getting that three. What would you give them? Well, we give them a three, because they’ve shown us repeatedly that they get it.” 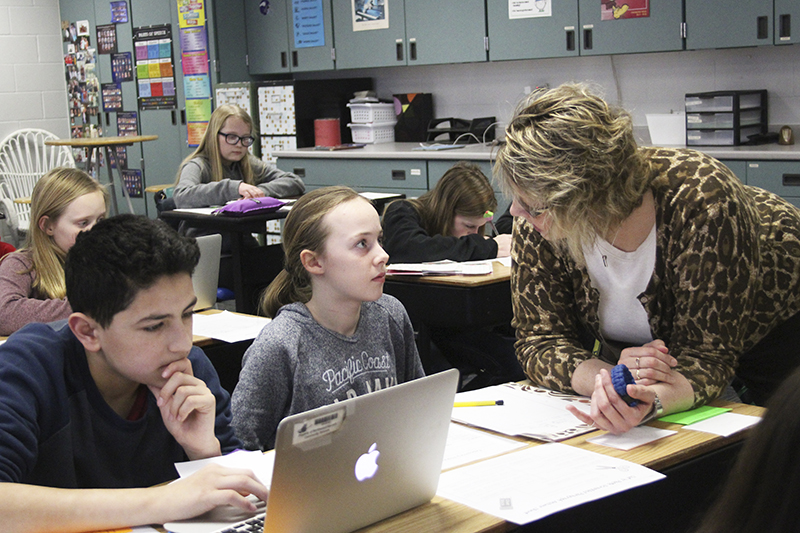 Fifth- and sixth-grade teacher Lisa Hagen works with Northwood-Kensett Elementary students on an essay draft, which is evaluated under a different grading system this year. – Sarah Kocher/Albert Lea Tribune

The breakdown is different, too: instead of a list of classes like line items followed by a letter, the report is more like a spreadsheet with several boxes to fill. An example from a different school shows the music category expanded, including a criteria that asks whether a student demonstrates rhythm using instruments and movement. In math, one standard checks how well a student understands place value.

According to Hebel, this method makes the grading more clear-cut: they can pinpoint what the child needs to do to meet a standard, and once they have done so, they can move on.

Costello’s perspective on letter grades came in part from a Feb. 12 meeting with Doug Reeves of Creative Leadership Solutions. He came to Northwood-Kensett to meet with district teachers as he works with the secondary school on preparing its teachers for the same transition the elementary school has made. This year’s sixth-graders will be moving up next year, which would mean a transition back to the grading system the elementary school just stepped out of.

Costello said Reeves’s talk with the teachers and administrators was affirmation for the educators that they’re on a good path, and a challenge, too, to keep thinking about how to make further changes in assessments.

Now, the challenge is continuing with parent communication about the newly adopted system. Fifth- and sixth-grade teacher Lisa Hagen said it’s a work in progress.

“I think at first, they were confused and had a lot of questions about it — rightfully so,” she said.

Costello said some of those questions are centered around understanding how the grades may change from quarter to quarter as the complexity of each ramps up. To counter that, Hanna and Hebel were preparing information to help parents know what the quarterly standards will be ahead of time.

“We have a tendency to fall back on what we know,” Costello said.

The teachers are getting used to it, too, but at the end of the day, Hagen said she thinks the shift to the standards-based system was a necessary one.

“I think it’s a better all-over picture of the student,” she said. It’s less about what a student can get done, and more about how they implement learning strategies.

And for the kindergarten student with the red crayon, starting at the bottom of a long path up toward a star, it’s a visualization of what they’re headed toward. 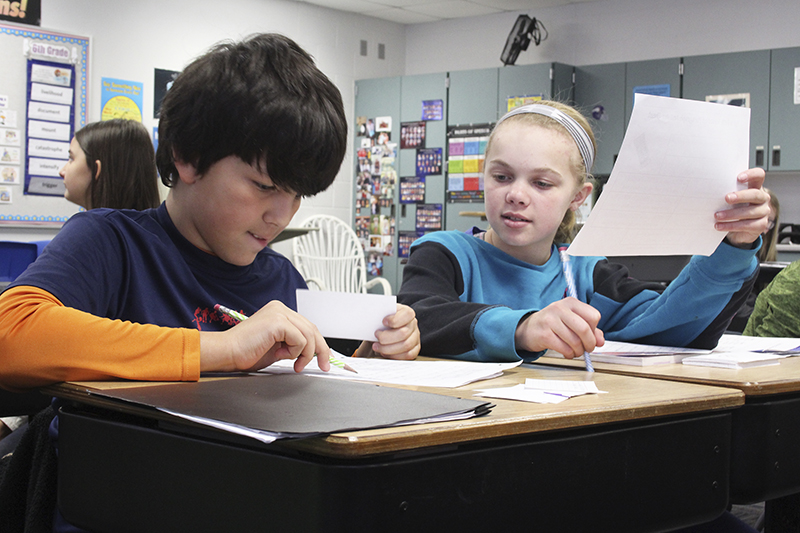 Sixth-graders partner up to work on sorting research for an informative essay. All of the grades at Northwood-Kensett Elementary made the transition to standards-based grading this school year. – Sarah Kocher/Albert Lea Tribune