Nature’s World: In or out: Critter reactions to winter differ based on species, habits 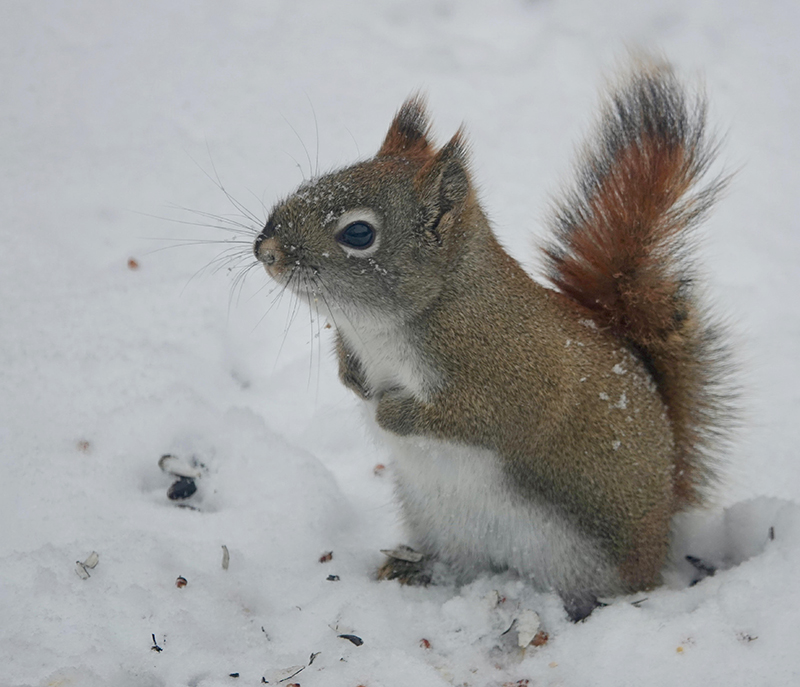 “Everything is nearly copacetic. I’m a little stiff and sore. I had a free coupon to the Fitness Center for the Clueless. It’s hard to pass up something free, so I joined an exercise class there. I grunted and groaned almost as much as I sweat. Now I feel a tad tired and achy.”

“That’s not true. You’re only as old as you feel the day after your first exercise class.“

A neighbor said that it was a good day to stay inside out of. It was blustery, but the trees of the yard did what they could to offer protection from the wind.

There was a hint of skunk smell in the air. As Pepe Le Pew said while swimming without an oxygen tank, “When you are a skunk, you learn how to hold your breath for a long time.“ Skunks aren’t true hibernators. They go into torpor. Their varied diet makes it easier for them to find food in winter when needed. Thanks to at least one being out and about, my nose experienced a fetid odor.

I saw raccoon tracks in the snow. The word “raccoon” was adopted into English from the native Powhatan term as used in the Virginia Colony. It was recorded on Captain John Smith’s list of Powhatan words as aroughcun and on William Strachey’s similar list as arathkone. Either way, it meant “one who rubs, scrubs and scratches with its hands.” The adaptability of raccoons has allowed them to thrive in urban areas.

The wind acceded to my wishes. It stopped suddenly and completely. It was cold, still and quiet as I replenished the suet in a feeder, I heard an odd whooshing sound overhead. It whooshed this way and that way. I turned this way and twisted that way in order to see the cause. It was a whirling flock of birds. A graceful movement of starlings called a murmuration.

“What are some popular musical groups named after birds?” This is certainly not a comprehensive list and there are some stretches, but here are a few: Black Crowes, The Byrds, Counting Crows, The Eagles, Fabulous Thunderbirds, Flock of Seagulls, The Jayhawks, The Old Crow Medicine Show, The Orioles, Charlie “Bird” Parker, The Sandpipers, Swans and The Yardbirds.

“Where do native ladybugs go in winter?” The lady beetles overwinter under leaf litter, fallen tree bark, firewood and similar locations. Extremely cold temperatures, temperature fluctuations and the snow cover depth can impact their survival. The legend is that the name “ladybug” was coined by European farmers who prayed to the Virgin Mary when pests were eating their crops. After ladybugs wiped out the invading pests, the farmers named them “beetle of Our Lady.” This was eventually shortened to “lady beetle” or “ladybug.” The problem with this legend is the insect is called a ladybird beetle in the U.K. It’s more likely to have been named because of its seven spots, which were believed to symbolize the seven sorrows of the Virgin Mary. The familiar children’s rhyme “Ladybug ladybug (ladybird, ladybird), fly away home. Your house is on fire, your children do roam,” referenced the burning of hop vines in England following harvests that cleared fields, but also killed ladybird beetles.

“If you cannot do great things, do small things in a great way.” — Napoleon Hill

Serendipity Gardens: Make your garden a reflection of you