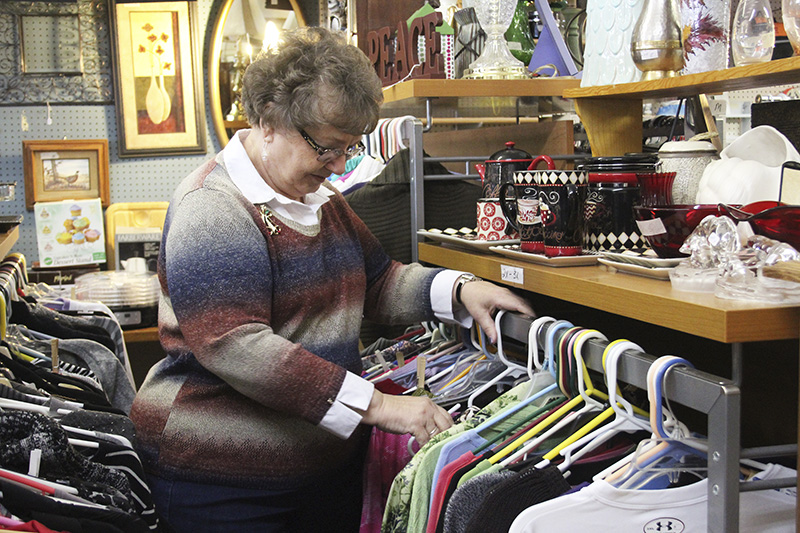 NEW RICHLAND — For three weeks each in February and August, New Richland’s resident consignment shop is closed. The owner, Linda Wagner, is not on vacation. She’s not at home sorting through her own closet or perched on a beach chair in Florida with an umbrella drink. Wagner is doing neither of those things. Instead, for those three weeks, twice a year, The Lady Bug Consignment is less like a ladybug and more like an anthill: calm on the surface, but full of activity, preparation and most of all, growing stockpiles of seasonal stuff.

In December, there were two life-size sturdy squirrel statues that look like they could be lawn ornaments or decorations for a front porch. The pair was perched on the glass top of a circular clothes rack right next to a purple plaid newsies hat. There was a cupid suspended from the rafters and a 1970s picnic basket wrapped in brown and orange plaid resting on a high shelf, dreaming of summer meadows.

“They find that item that they haven’t been able to find anywhere, you know,” Wagner said of the store’s variety. “You wait long enough, it will come in here.”

And there was Wagner, manning the counter. She has been doing that for five years, since she purchased the business from a previous owner. They close for three weeks twice a year to manage all the product they receive from its current owners. Wagner said over the 45 years since The Lady Bug started with its original owner, they have had over 3,300 separate consigners come through their doors with product for Wagner’s shelves. This is how Wagner wound up with a pair of squirrel statues. It is how she wound up with a cupid perched in her rafters, bow drawn, ready to snipe. 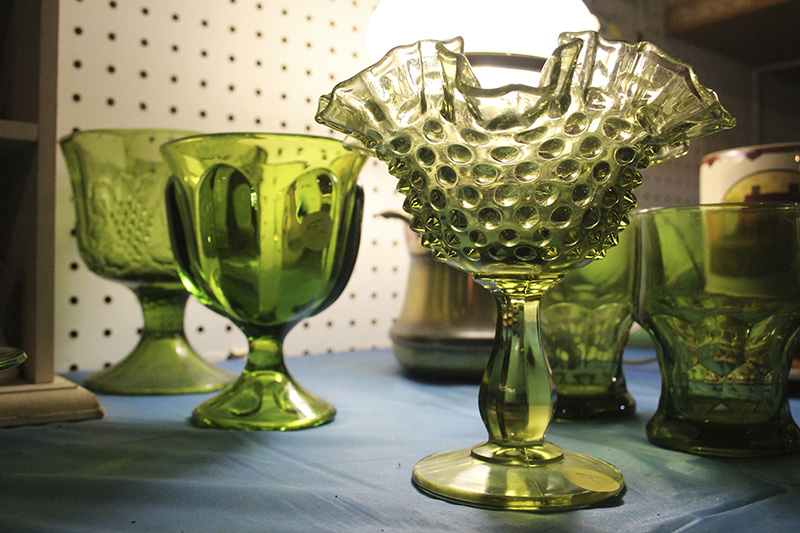 Twice a year, when it’s time for a new season of clothes, Linda Wagner and The Lady Bug donate the clothes to a church in Albert Lea and the household items to a church in Clarks Grove. – Sarah Kocher/Albert Lea Tribune

During the two-week time frame The Lady Bug accepts items to consign, Wagner said she is armed with a roll of tag tickets, which she buys in bulk — 10,000 tickets to a roll. And she uses them.

Before The Lady Bug, Wagner ran her own consignment shop — The Consignment Shop — on Minnesota Highway 13. It was smaller, and she ran it by herself for 12 years before giving it up. At the time, Wagner said, she had been working another full-time job, and she couldn’t do both.

Then the owner, Carol Schultz, put The Lady Bug up for sale.

“So one day I think in … January or so I walked in here and Carol was working and when I walked out, I’d bought the Lady Bug,” Wagner said. “And I came home, and I told my husband, ‘I bought The Lady Bug and you’re going to be my maintenance man.’”

She called the experience “a God thing.”

Joyce Routh, who works at The Lady Bug, said the store is a good option for people in town who are working with a budget or have limited mobility.

In this way, The Lady Bug is a service to the community, Wagner said.

“I think that’s the important part of it,” she said. “You’re not going to get rich doing this.”

When Wagner took over, she expanded. She cleaned out the basement and added collectibles, antiques and men’s clothing.

“I run it pretty much the same way (Schultz) did,” Wagner said. “Because it worked. She laid a pretty good foundation.”

“She doesn’t get all flustered or excited about anything,” Routh said. “If things happen, like something is broke or it isn’t done right … it isn’t the end of the world. We’ll get through it. It’s easy to work that way.”

But Wagner said running the store has been a bit more work than she expected, simply because of the sheer amount of stuff she plays middleman for.

“The volume is probably the biggest challenge,” Wagner said. “It doesn’t go out as fast as it comes in.”

And when the basement is filled up with textured green glassware and antique lamps and the upstairs bookshelf has tomes trickling out of its shelves, it can be a challenge to keep the store efficient or organized.

“By the time we get done with our season of taking in, it’s a challenge to make it feel nice and neat and inviting when you’re so overcrowded,” Wagner said.

Nevertheless, the stuff doesn’t hang around. Save for a household item that might make it two seasons, Wagner said the inventory is turning over all the time. In mid-December, The Lady Bug put everything at 25 percent off. In January, it was 50 percent off storewide. The first week of February there was a bag sale: Stuff almost any item into the provided paper sack, and you could have the lot for $10.

There’s not much left after that, Wagner said. For 17 years, she has donated the leftover clothes to Our Father’s House in Albert Lea.

“It’s a good way for her to donate items and she knows that they’re going to people that really need them,” said Brenda Christ, who is in charge of the clothing give-away at Our Father’s House. “It’s an outreach for her, too.”

For three, the Baptist church in Clarks Grove has taken the household items. Both churches sell the items to raise money.

With The Lady Bug Consignment, Wagner stays busy. She likes it that way.

“I find a lot of women my age are bored,” she said.

She’s not. She loves this, she said. She loves retail. She loves working with the public. She loves “the hunt for something different.”