On the force and on the ice 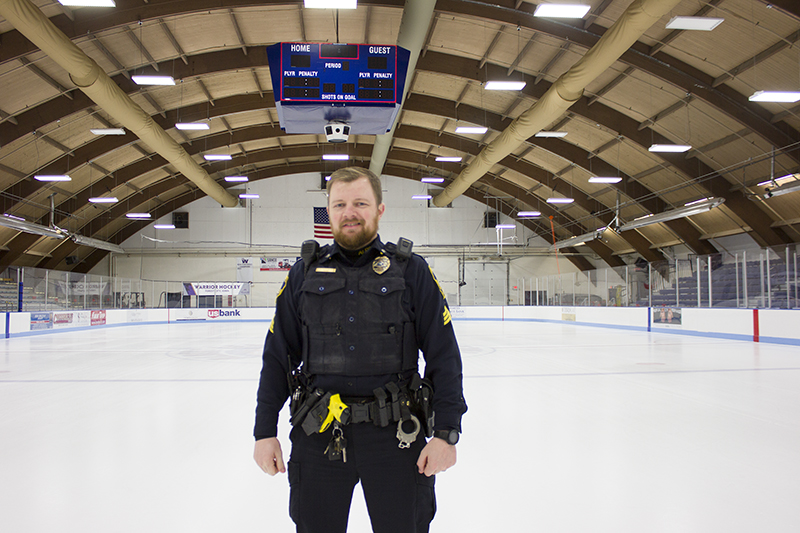 Albert Lea Police Department Sgt. Steve Charboneau’s work in the community does not stop when his workday ends.

Charboneau is head coach of the Albert Lea junior varsity boys’ hockey team and an assistant coach on the varsity squad.

Charboneau, 32, played club hockey at Minnesota State University-Mankato, where he graduated in 2007. The following year, he accepted a position in Albert Lea, where he has since been promoted to sergeant.

Charboneau, who played high school hockey in Richfield, began playing the sport when he was 4 years old and said he enjoys its fast pace and team-oriented format.

Charboneau is a member of the Albert Lea Youth Hockey Board.

As a sergeant, he leads the Lunch with a Cop program, an initiative where police visit elementary schools to have lunch with students to build relationships.

Charboneau is still on patrol duty in addition to having scheduling and other supervising responsibilities. He said he values the mutual respect he has with community members and credits the community’s small-town feel for enabling positive relationships.

Though acknowledging there are difficult aspects of being a police officer, Charboneau said he enjoys serving the community.

To Charboneau, police officers are like a second family.

“We all look out for each other,” he said. “I can trust and count on everyone who works here to have my back.”

Charboneau said he enjoys teaching students hockey, the sport he said has given much to him.

“It’s kind of nice to provide these guys with some lessons that I learned in high school that have helped me not only in the rink but also in real-life situations, so I really, really like coaching,” he said.

Though a majority of high school players will not play the sport in college or professionally, Charboneau said it still teaches high school  students work ethic, teamwork and sacrifice.

While acknowledging Albert Lea can present challenges for young people looking for an exciting nightlife, he said the community has quality school and park systems.

Albert Lea Deputy Director of Police J.D. Carlson said Charboneau coaches hockey teams his children are not a part of, which he said, “really takes a lot of dedication and support.”

Carlson said Charboneau has coached Peewee hockey and has given a part of himself to the community and hockey program.

Charboneau was named sergeant after the department created the position within the last five years.

“Steve rose to the top quickly in our department,” Carlson said, adding Charboneau prides himself in being a tactically-sound sergeant who digs into investigative work.