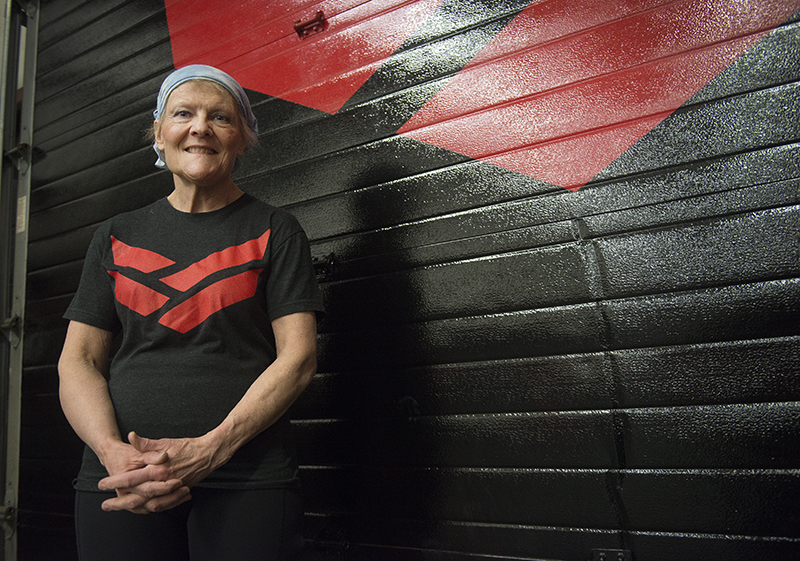 Polly Schiltz attends CrossFit four times a week after she finishes teaching at Northwood-Kensett. She has continued CrossFit throughout her chemotherapy treatments in Rochester as she fights breast cancer. Colleen Harrison/Albert Lea Tribune

Over the course of one year, a Northwood-Kensett teacher fighting metastatic breast cancer has seen her relationship with CrossFit change.

“I kind of evolved into where I couldn’t stop going,” Polly Schiltz said.

Polly Schiltz, 64, began attending CrossFit at the recommendation of her son, Nick Schiltz. 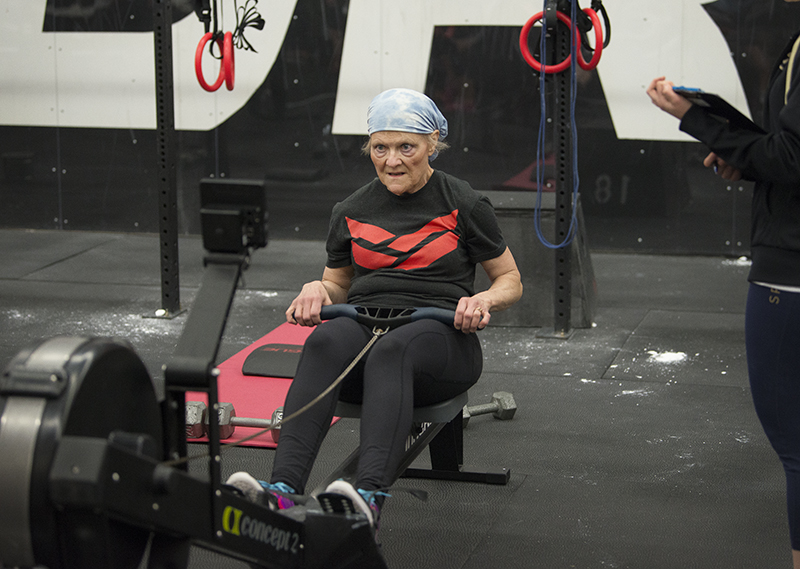 “I mean, I knew that he enjoyed going to this gym, and I think I thought, I mean, OK, that’s fine — for him,” Polly Schiltz said.

When Nick Schiltz moved back to the area, Polly Schiltz said he got her daughter, Katherine Schiltz, involved in CrossFit, too.

“We didn’t think she would last that long, but she just took it and she took off with it,” Nick Schiltz said.

Polly Schiltz swam and walked, but she said she wasn’t into fitness and athletics as much as her children. CrossFit, Polly Schiltz thought, was for young athletes.

Still, Polly Schiltz said, her children talked her into going to an open house, where the trainers echoed some of the things her daughter and son had been saying.

“They assured me that there is a place for me in CrossFit,” she said.

One of her CrossFit coaches, Brittni Lair, said she has seen Polly Schiltz become an asset to the gym because of her attitude.

“Polly is a true example of somebody who took a step out of her comfort zone and took a chance with something that she really had no experience with in the past,” Lair said. 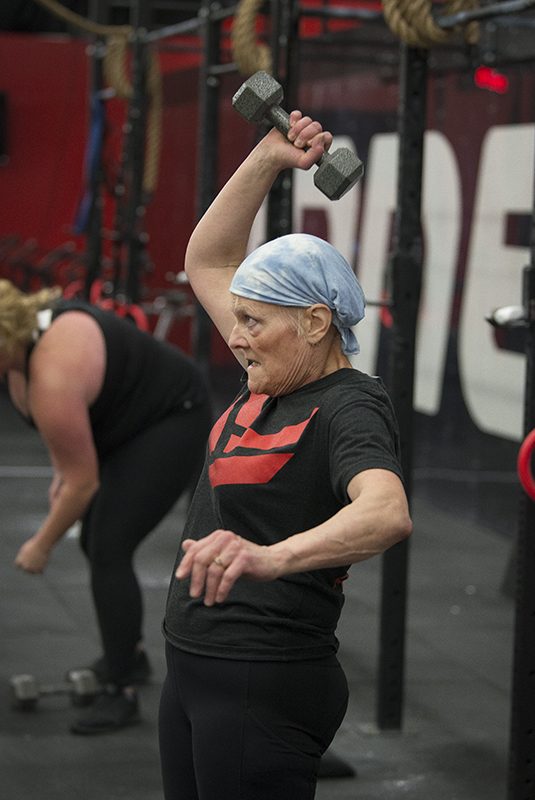 But when Polly Schiltz showed up for her first session, she remembered looking around and seeing a group of people all much younger.

“‘What am I doing here?’” she said she remembered thinking at her first session. “‘ …Do I really belong here with all these athletic people?’”

Now, she sees how she does. CrossFit is a building process in which individuals scale exercises to their ability. It’s about starting where you are, Polly Schiltz said.

“Polly is, she’s very inspirational, because she always — whatever she sets her mind to, she’s going to achieve that goal and no matter what we ask of her, she’s always willing to do it with a smile on her face,” Lair said.

Nick Schiltz said he thinks his mom stuck with it because of the support and attention she received from coaches who worked to help her adapt movements.

“It was really customized for her level, so when it was that personal, she really knew someone believed in her,” he said.

She has been reassured and encouraged by trainers and other participants, and through that process, Polly Schiltz said she has discovered another community of support in her life.

At one point, Nick Schiltz’s mom came home from Home Depot with a PVC pipe to practice her own movements.

“She would come home, and all she would talk about is CrossFit,” Nick Schiltz said.

Sometimes, she would be frustrated with herself about what she wasn’t able to do compared to some of her other classmates. Nick Schiltz said these moments frustrate him, too, but for a different reason.

“Wait a minute,” he said. “You just battled cancer here a few times, and it’s probably the first time you’ve done some of this stuff. It’s a miracle that you’re doing (this).”

In 2009, Polly Schiltz was diagnosed with breast cancer. It metastasized in her spine in 2012, and then in 2014 in her liver. Since 2014, she gets bone scans every three months, she said.

The diagnosis was alarming; her mother had breast cancer and died after a six-year battle. At the time, Polly Schiltz’s own daughter worried until her parents explained that it wouldn’t be passed along through Polly Schiltz; Katherine Schiltz became their daughter through a donor egg.

Throughout her time with the diagnosis, Polly Schiltz has had continual treatments. She’s had 20 lymph nodes removed. She’s had radiation, anti-hormone pills, experimental treatments through participation in Mayo Clinic studies in Rochester, and most recently, chemotherapy. She started chemo in January after a December CT scan showed her cancer growing. Because her cancer has metastasized, Polly Schiltz said the treatments are focused on quality of life.

“There is no remission,” she said. “I’ve been told that and I accept that.”

She goes to Rochester for chemo treatment once a week for two weeks, then takes one week off. She feels pretty good, she said — she hasn’t dealt with many side effects throughout a lot of her treatments.

“I feel like I’ve been blessed with good health and a pretty good immune system,” she said.

Now, Polly Schiltz is finishing her third cycle of chemotherapy. She’ll have another scan the second week in March.

Although Polly Schiltz said she didn’t begin CrossFit as a therapy, her doctors at the Mayo Clinic in Rochester are thrilled she’s doing it. She said the doctors encourage fitness for cancer survivors, and that CrossFit has impacted her physical and mental well-being.

“I really feel I’ve been blessed with a lot of good energy, good health, and I think CrossFit has been a big part of that,” Polly Schiltz said.

She noticed it when she picked up a 24-pack of bottled water at Hy-Vee.

“This feels good, you know, to feel strength,” she said.

“For a moment, you have to sit back and say, ‘Wait a minute,’” Nick Schiltz said. “You’re 63 years old. There’s not that many people who are this intense about what they’re doing.”

That’s the physical well-being. According to Polly Schiltz, CrossFit has also been a mental buoy.

“It’s just given me more ammunition to fight,” she said.

In addition to the positivity she said the community surrounds her with, it’s also been a confidence boost.

“I have always had a positive outlook on life, and my participation in CrossFit has reinforced a positive attitude and the drive to keep up my fight in battling cancer,” Polly Schiltz said. “I feel good after the workouts. There is lots of happiness in the gym.”

Interesting fact: Enjoys traveling with her brother, who is an airline pilot, and her daughter. She goes to Canada every year.