Rebuilding Clarks Grove after the tornado 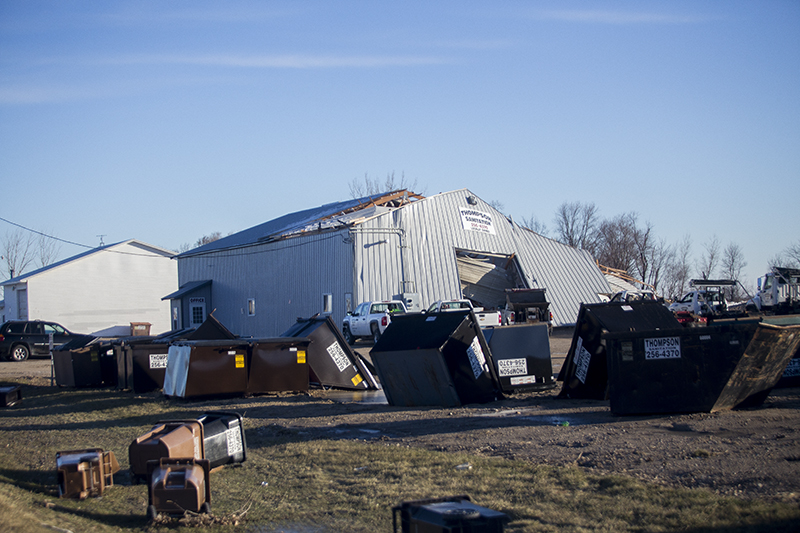 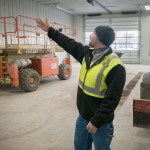 Thompson Sanitation owner Frank Thompson points out areas of the Clarks Grove facility that have been rebuilt after a tornado damaged it almost one year ago. Colleen Harrison/Albert Lea Tribune 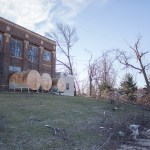 A number of power lines were brought down by tree limbs during the March 6 storm. Colleen Harrison/Albert Lea Tribune 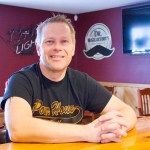 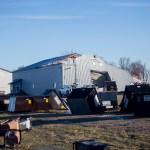 CLARKS GROVE — The north and south sides of the roof at the Thompson Sanitation main garage are different colors, symbolizing the damage the March 6, 2017, tornado had on the building.

After the tornado, Thompson Sanitation invested between $70,000 and $100,000 for new office space on the west side of the facility and extra room for tires and vehicles on its east side.

New overhead doors on the south side of the building emit natural light into the facility, which helps aesthetically and as employees work on trucks.

Thompson recalled being at his home east of Clarks Grove when the facility’s maintenance manager, Steven Thisius, called Thompson to inform him of the damage to the facility.

“He’s the one that called me and said, ‘I think you better get here,’” Thompson said. “‘A tornado hit Clarks Grove, and you guys got hit bad.’”

He said when he first witnessed the damage to his building, he knew cleanup would take a full year. A temporary wall was put up to protect the north side of the building.

Despite the overwhelming situation, Thompson said he knew he wanted to rebuild.

“As far as rebuilding, that was never a question,” he said.

A former Clarks Grove firefighter, Thompson said the tornado took a narrow path and did not strike the facility where collection trucks were stored, near the main office.

Thisius, Clarks Grove fire chief, was at the city’s fire station and City Hall when the tornado struck the city. He remembered standing outside the facility watching the storm arrive before moving inside the building when he noticed the wind increase.

“I looked over here, and this place was a mess,” Thisius said of the Thompson Sanitation building. “I really didn’t leave the fire hall until probably 3 a.m.”

Thisius noted the effort the Clarks Grove community made in the cleanup process.

“Everyone lended a hand, everyone came out and helped clean,” he said. “They were coming down asking what we needed. It was a small-town community — everyone jumped in, came together.”

Classified as an EF1 on the Enhanced Fujita scale, the tornado reached wind speeds of 100 to 110 mph and was on the ground for 12.3 miles, the National Weather Service reported after the incident.

It began southwest of Clarks Grove at 5:38 p.m. March 6 and traveled through the western part of the city before moving northeast through portions of Geneva and through northern Freeborn County. It lifted in Steele County at 5:51 p.m.

At its max, the tornado was 300 yards wide, the Weather Service reported.

The storm caused damage to businesses and residences in Clarks Grove — mainly in the central and western part of the town — as well as heavy rain and hail in neighboring communities.

Following the tornado, the Clarks Grove City Council and Freeborn County Board of Commissioners declared the county to be in a state of emergency.

Major damage was reported at Hardware Hank, the Central Farm Service facility, the fire station and storage sheds, among other locations.

‘We’re not leaving the town’

Its dry fertilizer plant, which holds about 37,000 tons of dry product, was damaged, as well as its facility’s rail protection system, grain bin that holds wet corn for drying, other buildings from flying debris and employee and company buildings.

Despite extensive damage to the facility, Ludwig said the business has largely rebuilt.

He thanked employees for their effort in the process.

“At the end of the day, (we) got through it and were able to accommodate our customers,” he said. “We’re very thankful that no employees were injured. Thankful to all of the help from employees, the support of the town and the Fire Department and all the personnel who helped us get through the storm.”

The timing of the early-season tornado was not ideal for CFS due to the coming planting season, resulting in product needing to be taken to other facilities. The business received help from another cooperative to store product, and employees helped the business repair damage.

To Ludwig, the company’s work in rebuilding shows it is committed to the Clarks Grove community.

“We initially chose to do the project here, and spending $5 million to reconstruct and repair certainly should send the message we’re not leaving the town and we’re committed to be here for a long time,” he said.

On the night the tornado struck, Hartland firefighter and Clarks Grove business co-owner Bruce Nielsen was at home watching television and became aware the storm was causing rain and pea-sized hail.

Soon after, Nielsen received the call that a tornado had struck Clarks Grove.

Upon arriving in the city, Nielsen recalled a scene he said could have been from the 1990s movie “Twister” — dodging debris and other obstacles caused by the storm.

Two businesses Nielsen and his wife own in Clarks Grove — the BP gas station and The Pour House — were in the path of the tornado.

The roof of the gas station was torn off from the storm.

“Thankfully, it’s a precast building, so it was a tough building, but the roof just rolled off and landed out in the backyard,” Nielsen said.

Skid loaders and tractors helped clean up the damage, and after the incident, it was decided a pitched roof would be built.

“More worried about the patrons and making sure everybody’s OK,” Nielsen said. “The structure — didn’t care … I just assumed seeing everybody OK. And the Clarks Grove Fire Department handled it very well.”

Nielsen estimated it took one month to fix the roof, which cost close to $50,000.

During the time the roof was being replaced, Nielsen estimated 7,500 totes and buckets were placed upstairs to prevent water from entering the lower floor while the gas station remained open.

Nielsen spoke highly of the approach the Clarks Grove community took in cleaning up from the storm.

“The community of Clarks Grove, tremendous local support for both our businesses here in town,” he said. “I could not see closing ’er down or walking away from it and not doing what we had to do to get ’er up and running again.

“I can’t say anything better about the community, from the Fire Department to the City Council or the mayor, they all work together.”

Nielsen recalled seeing local residents help clean up with chainsaws and tools after the tornado struck.

The Pour House also received damage from the storm, but did not have to close.

A contractor secured the facility’s roof the night the tornado struck.

Hardware Hank is also rebuilding after the storm and plans to re-open this summer.

To Nielsen, news the city’s hardware store would work to re-open this summer showed the community was back after the devastating event.

“I’m happy to hear that they will be the final puzzle piece that will be put together again,” he said. “It was a mess, but we did it. We got ’er back going.”

7,500 – Totes and buckets placed upstairs at BP gas station to prevent water from entering the lower floor while the facility remained open.