The funeral will be at 10:30 a.m. Saturday at Zumbro Lutheran  Church in Rochester. The Rev. Vern Christopherson will officiate. Visitation will be one hour prior to the service. A reception will follow the service. Burial will be in the spring at Minnesota State Veterans Cemetery in Preston. 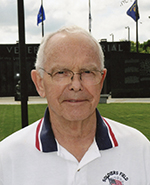 Rodney James Lee was born March 26, 1938, in Preston to Otis M. and  Ruby E. (Wead) Lee. His family moved to Freeborn, where he started grade school. After graduating from Freeborn High School in 1956, he served  four years in the U.S. Army. After discharge, he attended Minnesota  School of Business. He worked for the Rochester Public Schools as manager of data processing before becoming manager of the purchasing central warehouse. He retired after 33 years with the district.

On Sept. 5, 1964, he married Nina C. Solberg in Spring Grove. They lived in Rochester and raised two sons. Rod served as cubmaster at Gage School, president of the Zumbro Men’s Club, church council member and church softball team manager. Rod and Nina purchased her family farm from her brother, Tom, in 2003. They worked to restore the farmhouse and property before selling it in 2011. Rod and Nina also enjoyed collecting antiques for many years.

In the mid-70s he joined the U.S. Army Reserves as a military policeman with the 342nd MP Unit serving in Rochester and Fort Snelling. In 1990, at age 52, Rod was  activated to serve in Saudi Arabia during the Gulf War with the 407th civil affairs unit out of Fort Snelling. After returning home, he was  involved with the Gulf War Support Group, raising funds to serve 800 prime rib dinners to returning veterans and families at Mayo Civic.

Prior to the building of the Soldiers Field Veterans Memorial, he joined the committee, raising funds and gathering information for its  construction. He later led tours of the memorial for tourists and school children. Rod was also a member of Operation Hometown Gratitude, the Honor Flight organization which sent over a thousand World War II Veterans to  their memorial in Washington, D.C., American Legion Post No. 92, Veterans of Foreign Wars Post No. 1215  and the committee creating the annual veterans magazine printed by the Post Bulletin. Rod served a total of 27 years in the military.

Rod is survived by wife, Nina; sons Tony (Nicole) of Bloomington and Gary (Christine) of Dundas; grandchildren Arlie and Isabella; and brothers Larry (Patricia) of Albert Lea and Delbert (Cheryl) of Mason City.

In lieu of flowers, the family suggests memorials to charities of the donor’s choice.