Funeral services for Ronald Glen Eisenbise of Albert Lea will be at 10 a.m. Saturday at Salem Lutheran Church in Albert Lea. The Rev. Erica Cunningham will officiate. Visitation will be from 5 to 7 p.m. Friday at Bonnerup Funeral Service and one hour prior to the service at the church. Interment will be in Graceland Cemetery. Military honors will be accorded by the Albert Lea area veterans groups. 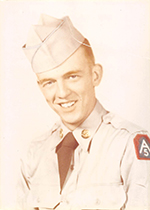 He graduated from Albert Lea High School and attended college at Mankato State. Ron was a career military man and served in the U.S. Army and U.S. Navy. He was a member of Zion Lutheran Church and Salem Lutheran Church in Albert Lea. Ron was a lifetime member of Veterans of Foreign Wars, Disabled American Veterans and American Vets. He enjoyed fishing, hunting and especially visiting friends and family.

He was preceded in death by his parents; sister, Donna Light; and a brother in infancy.