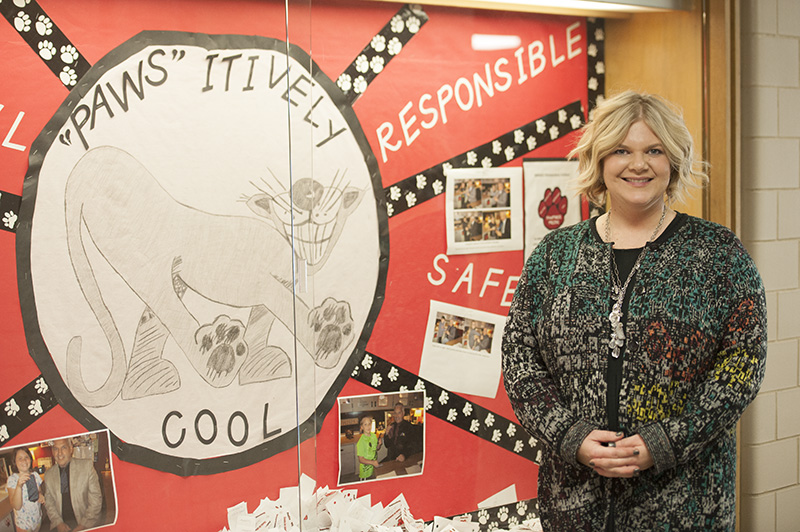 Krohn sees an average of 15-20 students on a daily basis and helps them with whatever they may need. She works two days with elementary students and three days with high school students. Tyler Julson/Albert Lea Tribune

ELLENDALE — Brooke Krohn, a 13-year school social worker for the NRHEG school district, has been nominated for a LifeChanger of the Year award by the school’s principal, Doug Anderson.

Krohn said receiving the nomination was an emotional moment for her, but she was quick to give the spotlight back to the community.

“It’s very humbling for me,” she said. “I think it’s a reflection of these four communities and all of the good things they do. They help me be able to do all of the things that I do.”

The LifeChanger Award is sponsored by the National Life Group Foundation. It recognizes and rewards the best kindergarten through 12th-grade educators and school district employees across the country.

As the school social worker, Krohn spends two days a week at Ellendale Elementary School and the rest of her days at the high school in New Richland.

She has a lot of responsibilities that come with her duties as the social worker. She said a lot of her job is visiting with children individually who might need help dealing with their feelings or emotions or helping them get through difficult events in their lives. She helps coordinate the backpack program alongside the New Richland Area Food Shelf.  The program helps to provide supplemental meals to over 90 children within the district.

Krohn also works closely with the other staff with problem solving and is a member on many different committees involved with the school.

“I get to build tons of relationships with kids and their families,” Krohn said. “I’m involved in the extreme highs and extreme lows of a lot of children’s lives. When a family or student lets me in to help out, it’s the most fulfilling thing ever. It truly is an honor when they allow me to help them.”

Krohn was born and raised in Geneva and graduated from NRHEG High School. She received her degree at Minnesota State University-Mankato. She has spent 13 years with the district and is raising a family of her own.

Krohn is married with two children, and when she is not working, she said she enjoys traveling and going to their family cabin. She also enjoys doing home improvement projects and being outside in the summer working on the lawn and her flowers.

13 – Years Krohn has worked in the NRHEG school district