Victor “Vic” Nelson, a longtime business owner in Albert Lea, died Tuesday, Feb. 6, 2018, at Veterans Administration Medical Center in Minneapolis. A memorial service is set for 11 a.m. Monday at First Lutheran Church in Albert Lea. Friends may greet the family from 2 to 4 p.m. Sunday at Bonnerup Funeral Service in Albert Lea and one hour before the time of service at the church Monday. Burial will take place at Fort Snelling National Cemetery in Minneapolis. 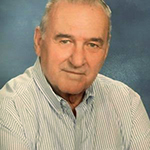 Vic was born Oct. 20, 1939, in Owatonna, the son of Victor and Alvina (Jacobson) Nelson. Vic attended school in Owatonna. After high school Vic enlisted into the United States Navy, serving his country from 1956 to 1960.

He was united in marriage to Mary Hedum on Sept. 10, 1973, in South Dakota. Vic was the owner and operator of Elbow Room in Albert Lea for 46 years. Elbow Room was voted the best hamburger in Albert Lea for the past 10 years. Vic was a member of Veterans of Foreign Wars and the American Legion, Moose Lodge and Eagles, as well as the secretary of the Elks Club for over 30 years.

Vic enjoyed playing gin rummy with friends, wintering in Texas, watching Minnesota sports and watching “Wheel of Fortune” and “Jeopardy!” with Mary. Other past hobbies in earlier years were softball and bowling.

In lieu of flowers, memorials may be directed to Peace and Power at First Lutheran Church in Albert Lea.

For more info or to leave a message go to www.brick-megerfuneralhome.com.