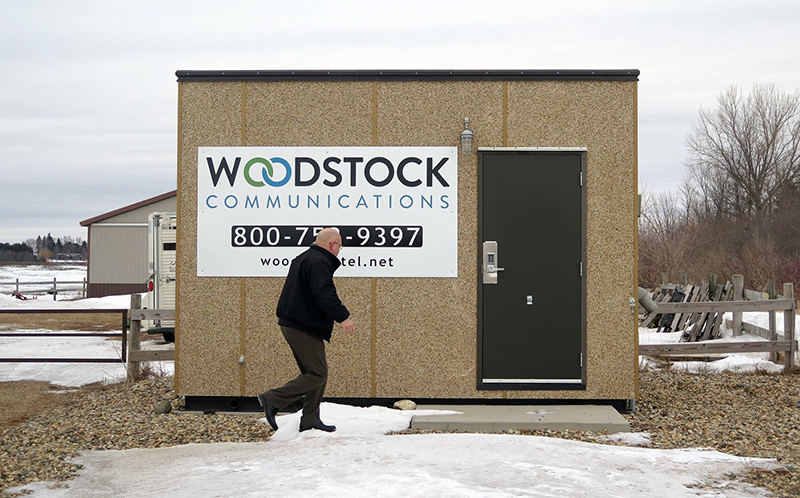 On a windswept hill near the town of Slayton in southwest Minnesota, Terry Nelson nods toward a steel communications tower. He points to a spot high above the ground.

“We have our equipment about 250 feet up on top the tower,” he said.

That equipment is part of the area’s fixed wireless internet service. Here’s how it works: A radio signal — instead of the more traditional fiber-optic cable line — delivers a high-speed internet link to area homes. Woodstock Communications built the system.

Google stunned the internet world in 2016 by investing in wireless internet technology and scaling back on its plans to connect customers with fiber optic lines. Wireless advocates like Nelson, Woodstock Communications’ vice president and general manager, say Minnesota should do the same.

“We see this as the solution,” he said.

Nelson’s company has built a wireless system using more than a dozen towers to cover most of two southwestern Minnesota counties. Other companies are doing the same in other parts of the state.

Most state dollars still go to fiber-optic projects, but Nelson and other players in the wireless industry say they’re ready to take on more of the funding pie.

“We can reach out about 6 to 7 miles with our wireless internet,” said Nelson, the company’s vice president and general manager. “And we’re picking up customers at 50-meg speeds. It’s worked well for us.”

That 50-megs Nelson’s talking about is 50 megabits per second — double the speed that the state of Minnesota hopes all residents will have by 2022.

Nelson said he believes wireless technology can play a major role in reaching the state’s connectivity goals. And unlike some wireless services of the past, he said, the low-frequency radio signal is unaffected by fluctuations in the weather.

But the best part of fixed wireless internet may be its cost. Nelson said fiber optic lines cost about $20,000 a mile to install. That’s a big expense. But instead of running fiber lines to individual houses, Woodstock Communications’ strategy is to run them to a wireless tower, and then use a radio signal to deliver the wireless internet to homes.

With that approach, Nelson said, his company can connect homes to the internet with wireless at a tenth of the cost of fiber.

“It’s fantastic,” said Jeff Salmon, one of Nelson’s customers. “It’s consistent and smooth and so far. [I] haven’t had any downtime with it.”

That enthusiasm for wireless is not yet matched at the state level. Last year, Minnesota’s Office of Broadband Development distributed more than three dozen grants totaling about $26 million to boost high-speed internet service across the state. Nearly all of those grants went to fiber line projects. That upset some wireless companies.

But the head of the state’s broadband department pushes back on that notion. Danna MacKenzie attributes the lag in state funding for wireless to the rapid technological changes happening in the industry.

“When we first started four years ago, the wireless projects that were out there were having a hard time meeting the state’s speed goal,” MacKenzie, executive director of the Office of Broadband Development, said.

That technology gap, she added, has by now all but disappeared.

“As wireless continues to improve, they’re going to be continually more well-represented in the mix of funding,” she said.

That addition could be important in accomplishing the state’s goal of bringing adequate broadband speeds to all state residents in the next four years. Right now, nearly 90 percent of Minnesota households have access to high-speed internet.

Most of the areas still lagging behind are in the state’s more rural regions, where wireless has the opportunity to thrive.

“We leverage the low cost and rapid deployment of fixed wireless to bring it to areas that no one else has really bothered to invest in,” Hauer said.

And, he added, the farming areas of southern and western Minnesota are especially well-suited for wireless internet coverage, because the technology works best in flatter, less-forested regions.

The state Legislature will decide whether to fund the broadband program for another year in its upcoming session. Wireless advocates will be on hand to make their case for a bigger role in fulfilling Minnesota’s high-speed internet ambitions.