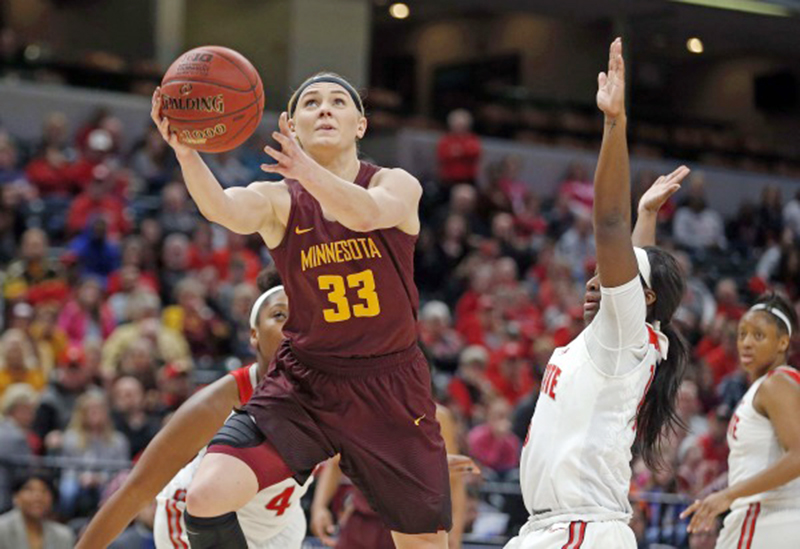 Carlie Wagner goes up for a shot during Minnesota's loss to Ohio State on March 3 during the Big Ten semifinals in Indianapolis. - Photo courtesy University of Minnesota

This Friday, she’ll try to help the Minnesota Gophers advance to the next round of the NCAA tournament.

With a record of 23-8 this season, No. 10-seeded Minnesota will play No. 7 Green Bay at 4 p.m. Friday in Eugene, Oregon. The game is scheduled to be broadcast on ESPN2.

The last time the Gophers appeared in the NCAA tournament, Wagner was a freshman at the University of Minnesota. Now a senior nearing graduation, Wagner said the tournament is a fitting way to end her collegiate career.

“My freshman year, I think I was happy with just making the NCAA tournament, but going my senior year makes me feel very differently than my freshman self,” she said. “I want to win, I want to survive and advance, and make some noise in this tournament. I am looking forward to Friday and just am so excited and anxious to play. This is the way every senior wants to go out.” 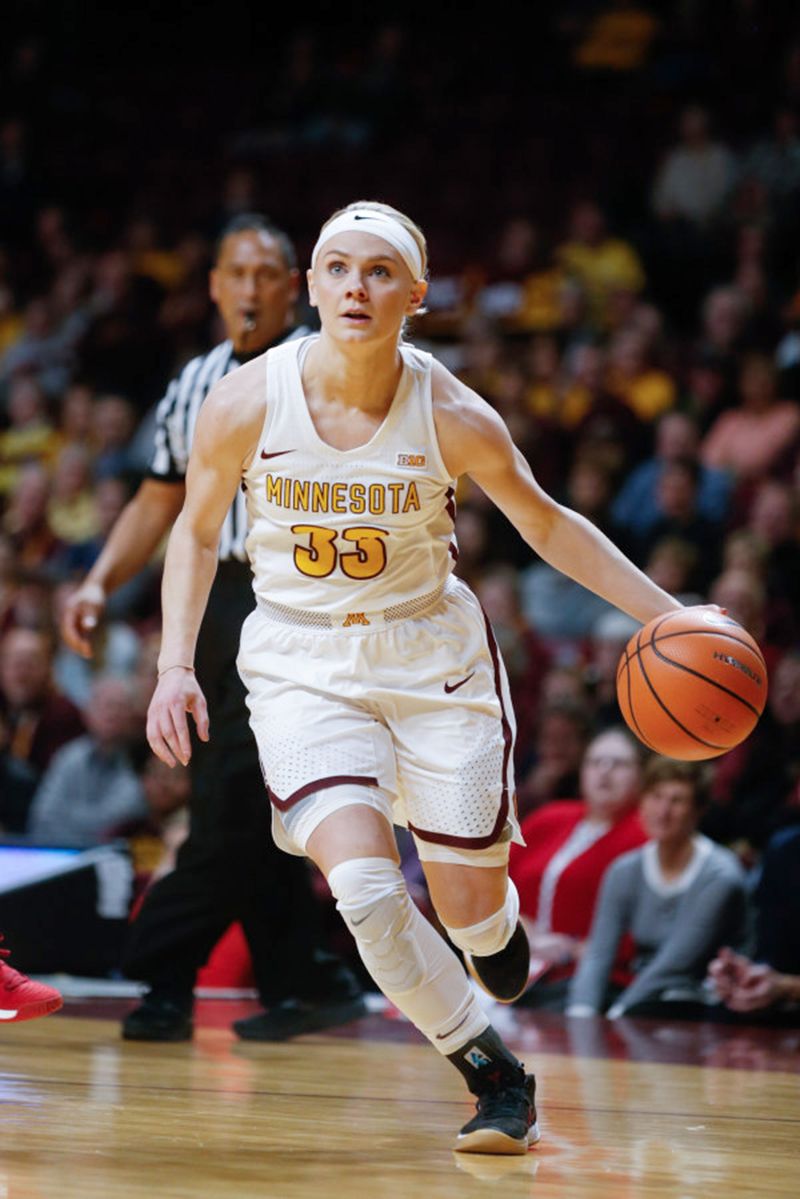 Wagner, 22, grew up in New Richland and was a star basketball player for the Panthers, helping them win two state titles. The daughter of Darren and Jane Wagner, she grew up playing her two older brothers, Alex and Danny, and playing with her two younger sisters, Marnie and Maddie.

Carlie Wagner has loved the game of basketball from a young age, and that love hasn’t gone away.

“What I love about playing basketball is having a team. I love going out and fighting for my sisters every night, knowing they are doing the same for me,” she said. “What I think I love most about basketball is the joy it brings me. No matter what is going on in my life, basketball makes it feel better, and is an escape for me, like my happy place.”

Wagner said some of her favorite memories playing for NRHEG are the years she spent with her sisters as her teammates. She also credits growing up in New Richland with helping her get to where she is today: a standout guard for a Division 1 basketball program. 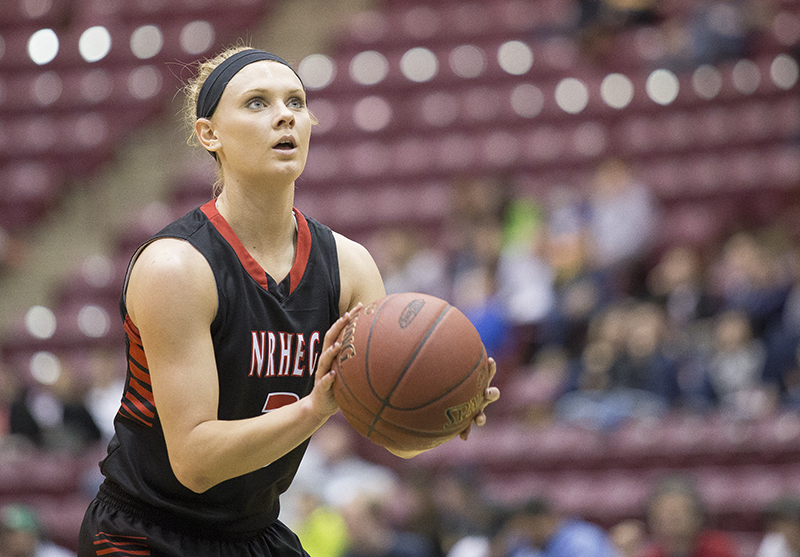 Carlie Wagner shoots a free throw during the Class AA state quaterfinals against Pequot Lakes in 2014 at Mariucci Arena. Wagner broke her own state scoring record with 53 points that game and NRHEG won to advance to the state semifinals, eventually winning a second consecutive state championship for the Panthers. – Colleen Harrison/Albert Lea Tribune

“Growing up in New Richland definitely laid a foundation down for me as I started my basketball career at the U of M. My hometown is the reason I even had the opportunity to play basketball at the D-1 level,” she said. “My hometown is my foundation; they are the foundation of who I am, and made me the person I am today.”

Wagner has demonstrated the strength of that foundation through her four years starting for the Gophers. Heading into today’s game, she sits third on the program’s all-time scoring list with 2,180 points. A First Team All-Big Ten honoree and member of the Big Ten All-Tournament Team, she leads the Gophers in three-pointers made (92), three-pointers attempted (228), three-point shooting percentage (.404), field goals made (219) and field goals attempted (507). She is averaging 18.8 points, 4.7 rebounds, 2.4 assists and 1.4 steals per game.

Over the years of success, Wagner has seen changes in herself.

“I hold myself responsible at a higher standard, but also my teammates as well. I have learned to be a great multi-tasker, which is so important when in college,” she said. “As a basketball player, I have become stronger, more mentally than physically. I am able to handle adversity in high pressure situations, where as before I would have panicked, and learned to take criticism and run with it.

“But most of all, these past four years of basketball has taught me to be unselfish. I have learned what it is like to put teammates, or ones you care about, before the needs of yourself, and it has made me a better teammate, but also a better person.” 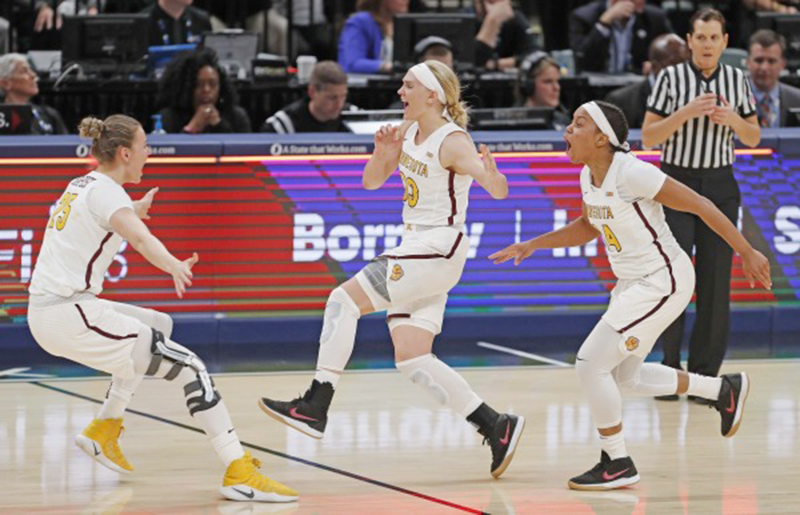 Not only a standout athlete, Wagner has been a standout student as well. Double-majoring in business marketing education and communications, she has been named an Academic All-American twice. CoSIDA’s Academic All-America program recognizes student-athletes who succeed in the classroom while making significant contributions in competition. Wagner has maintained a 3.59 grade point average while ranking second among the Golden Gophers in scoring. She is just the second player in program history to achieve the honor more than once.

As her senior year has progressed, she has looked back at her time with the Gophers and toward the people who have gotten her to this point. Wagner credits her family, friends, teammates and coaches from over the years, and made a point of thanking her family for all the long drives and late nights they’ve spent supporting her. 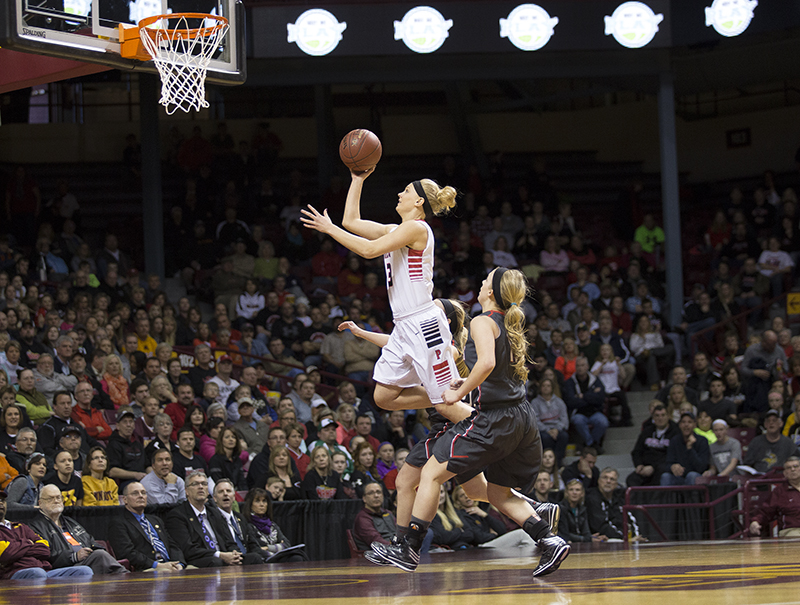 Carlie Wagner, a NRHEG senior at the time, attempts a basket during the Class AA state final in 2014 at Williams Arena in Minneapolis. NRHEG defeated Kenyon Wanamingo to win the state title for the second consecutive year. Wagner would play in the same arena months later as a freshman starter for the Gophers. – Colleen Harrison/Albert Lea Tribune

“One of the greatest things I will remember when I look back on my career here at the University of Minnesota is for sure the relationships I have made over the years, and the amazing friendships that have flourished here,” she said. “I would like to just thank my family and friends and really just southern Minnesota in general. The support and love you have shown me is just indescribable. I just want to let you all know that I really mean it when I say that I could not have done it without you, and I appreciate you all more than you will ever know.”

As for what Wagner plans to do next?

“My plans after college? Stay tuned,” she said.

With her time wearing the maroon and gold drawing to a close, Wagner said she has found herself reflecting on where she was four years ago.

“If I could go back four years, I would tell my high school senior self to never underestimate yourself, and that you are stronger than you think,” she said. “Four years ago, I would never have dreamed of being where I am now.

“I would also tell myself that the days are long, but the years go fast, and that no matter how tough things get, enjoy it because before you know it, your time is almost up.” 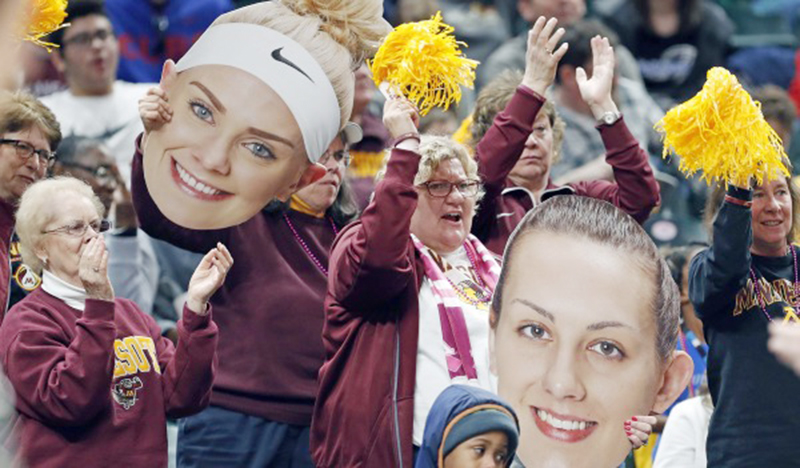 Fans hold up a cutout of Wagner’s face during the Gophers’ Big Ten semifinals loss to Ohio State on March 3 in Indianapolis. – Photo courtesy University of Minnesota

Who: New Richland native Carlie Wagner and the Minnesota Gophers

What: against Green Bay in the first round of the NCAA women’s basketball tournament

Where: Eugene, Oregon; broadcast on ESPN2 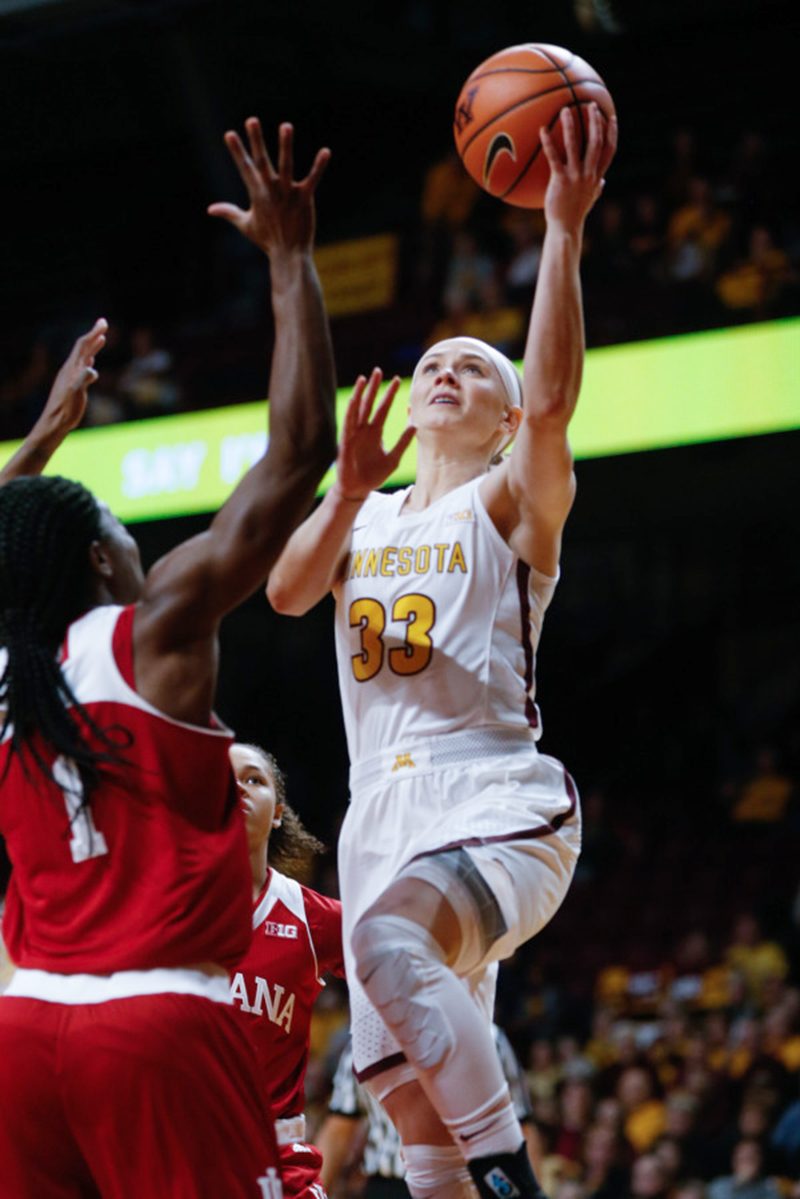 Carlie Wagner puts up a shot in Minnesota’s Feb. 20 loss to Indiana on Senior Night in Minneapolis. Wagner is finishing up her senior year as a Gopher. – Photo courtesy University of Minnesota